Yeah, so...thunderstorms right now, and a flash-flood warning, but today was not a bad day. Oh, currently, it's 53˚F.

It helped that there was a little royalty check today, and that I learned this afternoon that the overdue big check should be along soonish, but mostly it was a better day because it was a McWane day. I spent almost four hours of it grinding away at the jacket Kathryn and I made way back whenever that was. Last month? I'm maybe an inch and a half from the bone layer, which means I might strike tylosaur tomorrow (which is also a McWane day). So, less broke + mosasaurs = less depressed and angry. See? I'm reasonable, people.

My right hand is sore from the air scribe, but what the fuck, right?

Tonight TV was an episode of American Masters about Andrew Wyeth, the season premiere of RuPaul's Drag Race, and the first three episodes of Season Five of Better Call Saul.

I only slept about five hours last night.

And there's eBay. Just click here to see all the marvelous books that can be yours. Good stuff. No, really. I'm not just saying that because I wrote them and need to pay my rent this month. Plus, when the coronavirus has you stuck inside (and you know it's only a matter of time now), you'll have shit to read. 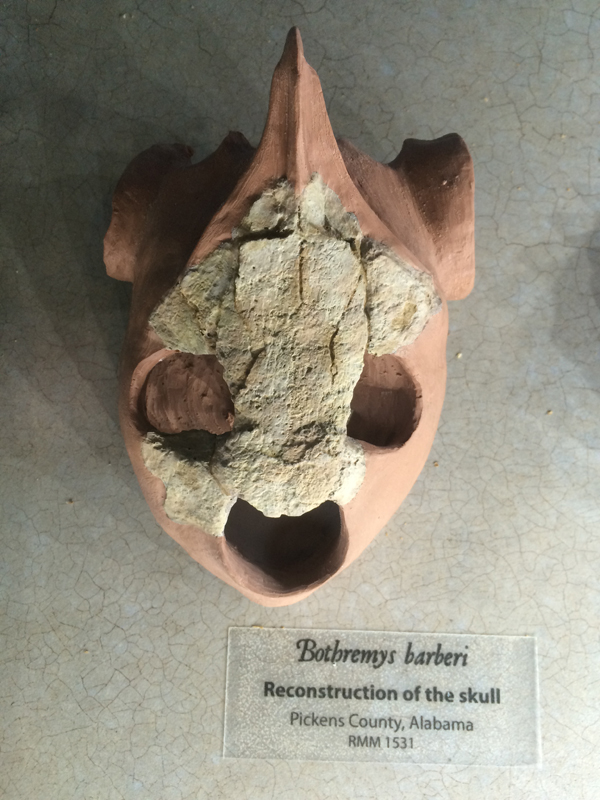 But Spooky and I did work on organizing my office. We got books up off the floor that had been there since way back in the summer, since just after the move. Yeah, I'm still unpacking.

I did make it to Piggly Wiggly, the first time I'd been since the toenail thing, back on the February 26th. In fact, that was only the fourth time I'd left the property since the 26th. 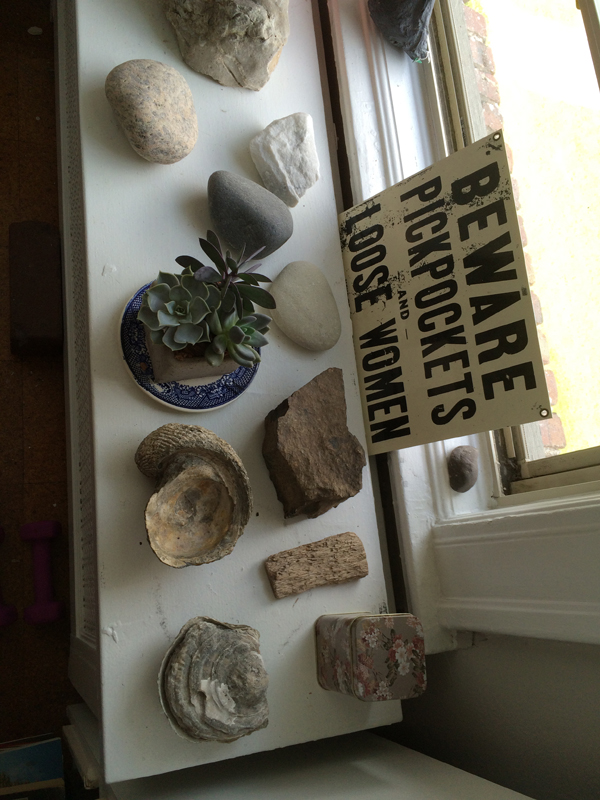 Rain, rain, rain. With some thunder, lightning, and wind, just to break up the monotony. We may see the sun on Sunday. Currently, it's 61˚F, so at least it's not cold and wet.

Today, the mail brought me my contributor's copy of Paula Guran's The Year's Best Dark Fantasy and Horror 2018, which reprints "The Dinosaur Tourist."

Once again, I am labeled a polymath. I suppose I cannot argue.

And we watched the last episode of of The Sopranos (so, eight-six episodes in less than a month), truly one of the most brilliant hours of television I ever have seen. And almost certainly the best ending for a series finale that I have ever seen. I'm twelve years late to that controversy, but there's my idea, anyway. Tonight, we're beginning a rewatch of Mad Men, which, as it happens, began on June 19, 2007, just nine days after the final episode of The Sopranos aired. So, there's some nice symmetry.

I think I'm about to do a minor book purge, mostly fiction. I need the shelf space. So, novels I know I'll never read again are in the crosshairs. I figure I can probably trade them for store credit at Reed Books.

Please have a look at the current eBay auctions, speaking of books I want someone else to own.

I'm pretty sure that when Bernie Sanders talks about completing the revolution, what he actually means is finding whatever of America Trump hasn't destroyed and finishing the job. 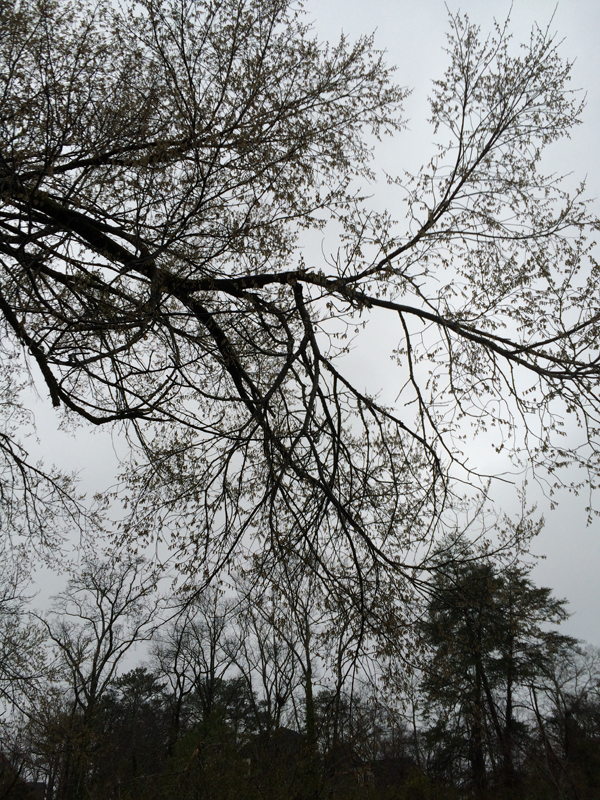 Sunny and not as hot today as yesterday. Yesterday, we made it to at least 93˚F with a heat index of 104˚F, the worst heat index I've seen since we got here. Currently, it's 86˚F, with the heat index at 88˚F.

I spent most of yesterday shelving books, a last push to finish it because I could no longer stand the mess.

From Facebook, this morning: And, in the end, no one ever said anything ever again that could possibly offend anyone, so great was the fear of retribution. It was safer not to speak. No one felt oppressed or triggered ever again. Outrage and offense became a thing of the past, along with comedy and art, literature and casual conversation, film and, for that matter, sex. And there was peace and bland silence and a smothering grey stillness where once there had been a vibrant culture.

I've been feeling guilty about how damned long it's taking me to write Interstate Love Song/The Starkeeper, about how my Patreon followers have proven so very faithful and understanding, and I started thinking...maybe I could put out an old-fashioned zine as a reward for the $10 and over folks. Maybe quarterly. Typed and handwritten, photocopied, drawings and comix and thoughts on bands and movies and maybe interviews JUST LIKE IN 1994, a year I miss so bad there is an actual ache. So, that's an idea. And if you don't know what I'm talking about, ask your mom or dad.

Meanwhile, please have a look at the current eBay auctions. Thank you. 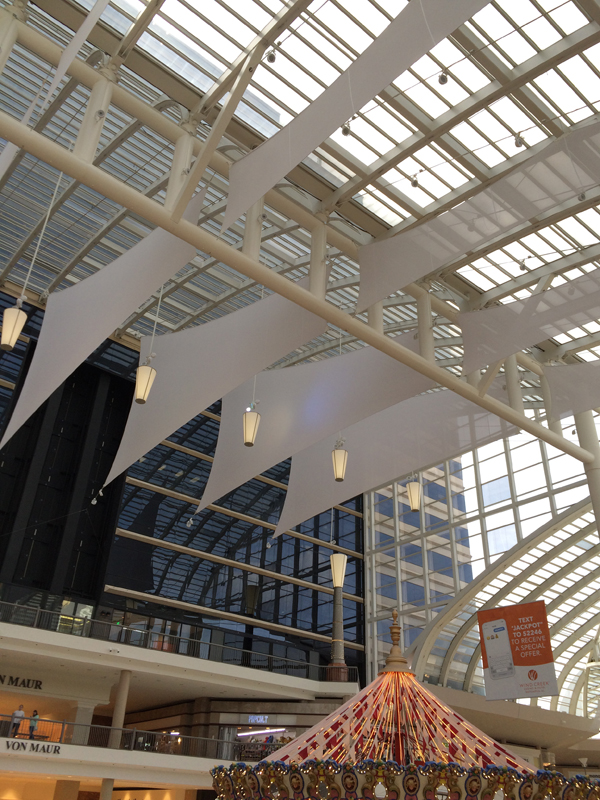 Sunny and hot this morning, this almost afternoon. Currently, it's 87˚F, the heat index at 96˚F.

Yesterday, I wrote 1,013 words on "The Eldritch Alphabētos" – "Y is for Yog-Sothoth" and "Z in for Zoog." I began the alphabet way back on May 3rd, in Providence.

Today, I'll be assembling Sirenia Digest No. 150, which, I suppose, is a sort of milestone. Or millstone. Others may be the judge.

After writing, Spooky and I took two more heavy loads of books to the Harris Building. It was sweltering, and I bled water like a flood. But, more and more, I am coming to enjoy physical labor again, after so many sessile years. It's good to sweat. Anyway, one of the things I took to storage was four boxes of contributor's copies of anthologies that I have stories in. These are books I took off my shelves, because I see no point in them taking up space just because I have stories in them. There are too many other books I'd rather see shelved.

After Harris, we took another load to my mom's stuff I'm keeping out there, old Apple computer stuff, two of our old laptops, including the Asus I got in 2011 and never used for anything but MMOs. We got dinner from Rusty's, washed clothes, and stayed the night. We watched the fourth episode of the Ken Burns Vietnam documentary.

At Tom and Jerry's on Southside (a Chevron Station that's been there since the early 80s) I just saw an energy shot called Tweaker. No, really.

Also, noticed the local law office of one V.J. Elmore III, and I'm wondering if he's the grandson of the V.J. Elmore who founded the chain of dime stores back in 1925. He could be.

"'It might rain whores out of the sky, too, but I doubt it,' Roy Bean said." ~ Larry McMurty 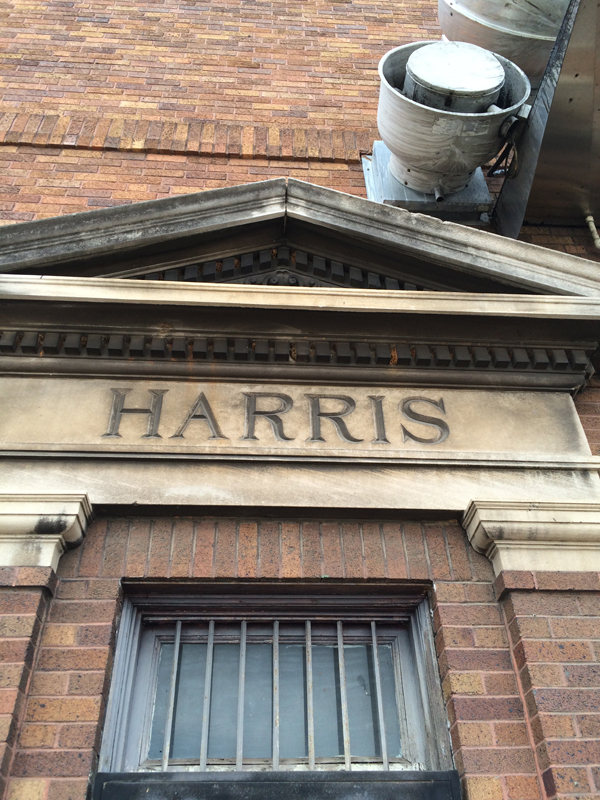 They don’t go in the door, of course, the locked and boarded door inside the marble arch, Harris chiseled deep into the pediment overhead.

So far, overcast today. Currently, it's only 78˚F, with the heat index at 83˚F. The first half of yesterday was rainy, but then, mid afternoon, the sun came out.

Yesterday, I wrote 1,165 words on "The Eldritch Alphabētos" – "V is for the Vaults of Zin," "W is for Walls of Eryx," and "X is for Xura." I intend to finish the alphabet today.

After the writing, we drove out to Leeds to retrieve more boxes we'd stored at my mom's, then took them to the Harris Building. But after that, the day sort of fell apart. It was, for me, another bad day. I think there are too much of these days. I'm getting up too early or something. I desperately need something that isn't here.

Nothing much worth mentioning last night. Bad takeout again, and then I had a little RP before bed.

“There should be no rules about how a conscience should function.” ~ Ernest Hemingway 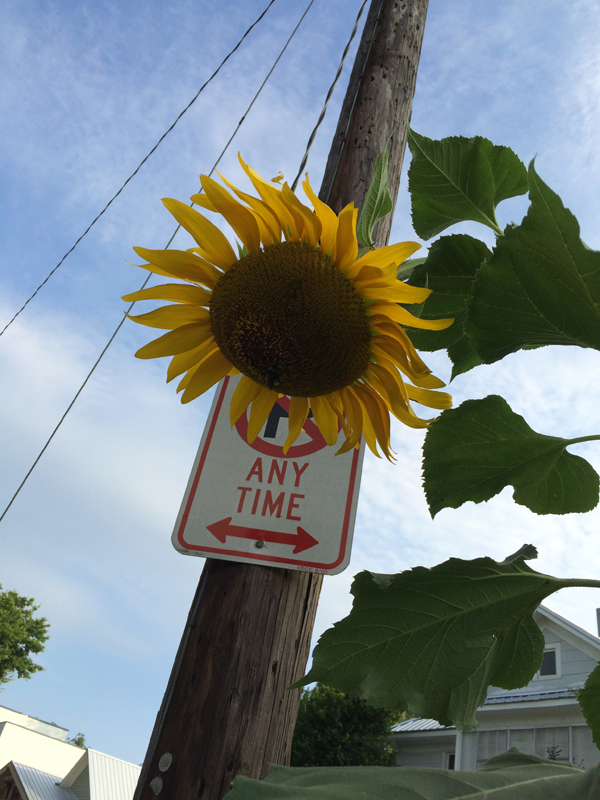 Another hot day yesterday. The heat index made it above 100˚F again before the storms hit. There was a huge one that rattled the mountain all around us. And then the temperature plunged to 76˚F in just a couple of hours. Today, there are more storms on their way. Currently, it's only 83˚F, with the heat index at 90˚F.

No writing yesterday. We drove out to my mother's in Leeds and retrieved most of the boxes we'd taken there, then put them in the storage unit in the Harris Building. I poured sweat. But it's good to be active again.

Today, I need to try and write letters S, T, and U for "The Eldritch Alphabētos."

Last night, after sunset, we drove out to the Riverchase Galleria, where I'd not been since 2002. It was comforting to see that, at least outwardly, it has changed very little since then. Back home, we watched the second episode of Ken Burns' Vietnam series.

Please have a look at the current eBay auctions. My thanks to everyone who's bid. 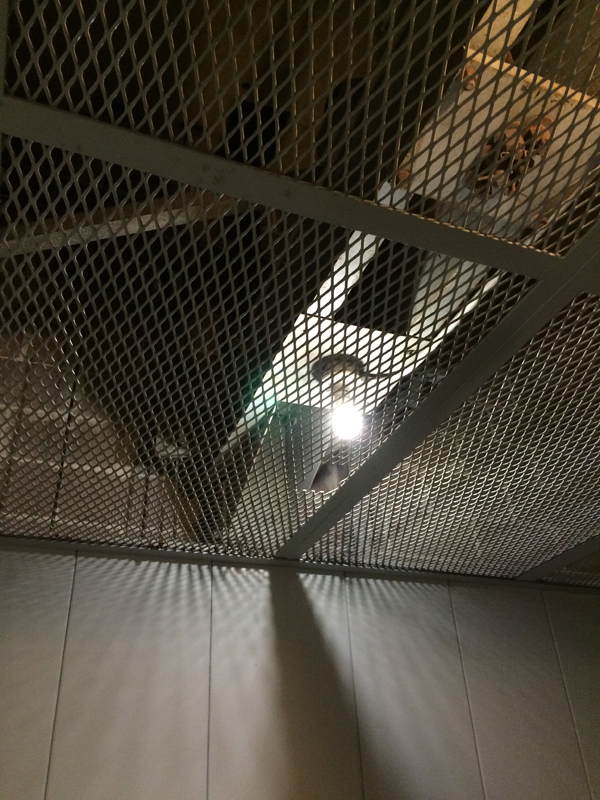 Very hot yesterday, and it will be very hot again today. I know we made it to 93˚F yesterday, with a heat index of 103˚F. But then storms rolled through and the temperature quickly dropped to about 83˚F. Today, we have a heat advisory.

Yesterday, I did only 590 words, "R is for R'lyeh." I was going to make a big push toward finishing the alphabet today, but then I only slept about four hours last night. So, I'll be moving boxes to the Harris Building, instead.

We did get a good walk yesterday evening. Jemison Park was soaked from the rain, and the air along Shades Creek was almost chilly. We did more than a mile. Last night, after more bbq chicken, we watched the first episode of Ken Burns' Vietnam series. 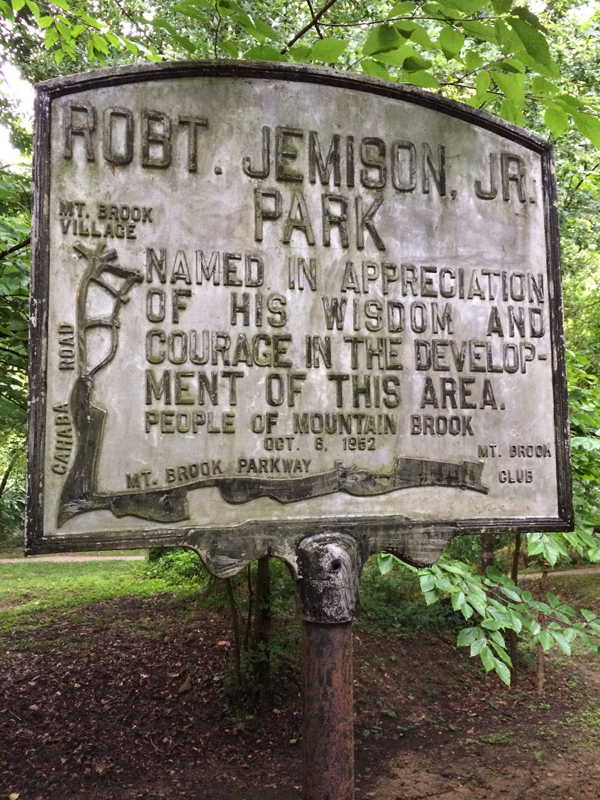 Another very hot day yesterday. Late, I noticed that the heat index had reached 101˚F. It rained, and that was good, but it did little to discourage the heat. Currently, it's 88˚F, with the heat index at 97˚F.

A few books were taken to the Harris Building, but it was too hot for much of that sort of thing. We didn't even get our evening walk. But Spooky had made BBQ chicken in the slow cooker, using Dreamland sauce, apples, mushrooms, and potatoes, so supper was very fine. I had some RP later on.

If you haven't yet, please have a look at the eBay auctions. Thanks. 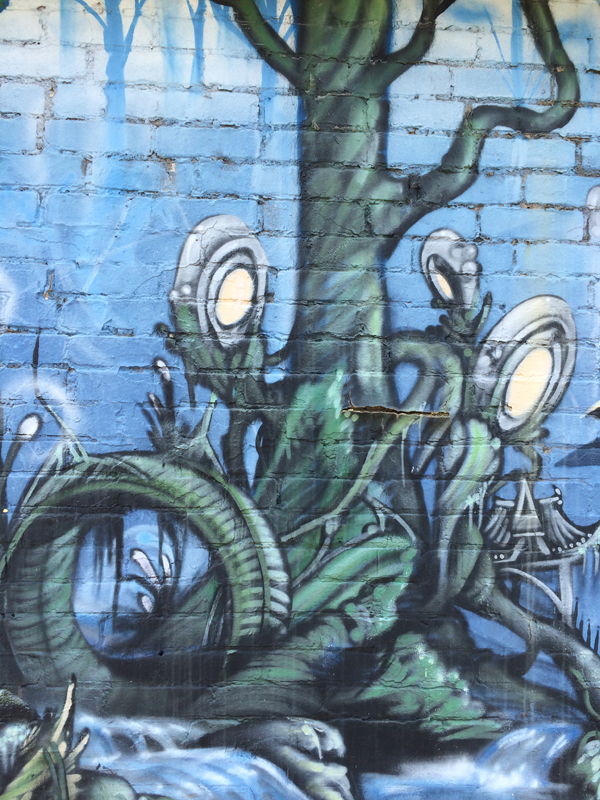 I wrote 1,012 words yesterday on "The Eldritch Alphabētos," finishing both "O is for Old Ones" and "P is for Pnath."

And then we went to the Harris Building and rented a storage unit. My readers may recall that the Harris Building is the location of one of my early short stories, "The Long Hall on the Top Floor," written back in (I think) 1998. Also, I had a storage unit there from 1999 until we left for Providence. I was last there on May 27, 2008, when we loaded everything out for the move north. I'd hoped to avoid another the cost of renting another storage unit upon returning to Birmingham, but it has become unavoidable. There are just too damn many books. So, there you go. Ten years later, I'm back at the Harris Building, where Deacon Silvey and Sadie Jasper once saw a ghost.

We had a good walk later on, another mile or so, down past the old mill on Mountain Brook Parkway.

Last night, after more spaghetti, we watched Gene Kelly and Stanley Donen's On the Town (1949), which stars not only Kelly, but also Frank Sinatra. It's an old favorite of mine. 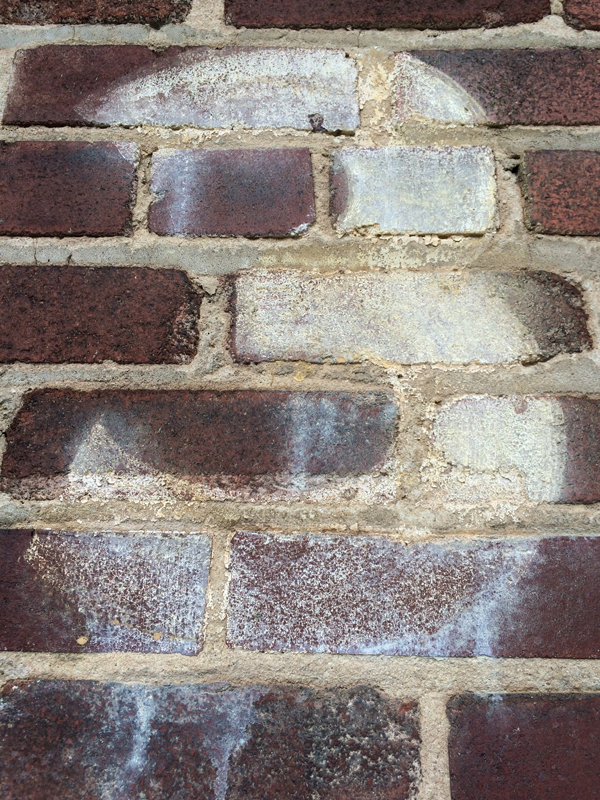