Today I ran errands with Spooky (the bank, the market, the post office) and we did the last of our Christmas shopping. I found a pair of cast-iron mice and a 1940s Burroughs typewriter. Tomorrow, I have to go back to writing.

Tonight, we watched the first wretched hour of something called The Witcher. It was a special sort of awful, and the less said the better. But then we watched Tom Harper's sublimely beautiful and often terrifying The Aeronauts (2019), which I loved despite its problematic decision to replace Henry Coxwell, the balloonist who actually saved the life of meteorologist James Glashier in 1862, with an entirely fictional character. Regardless, yes, it was very good, if somewhat more interest in present-day ideals than in historical accuracy.

And today on Facebook I said: Art has to be free to offend, almost by the definition of what makes it art. And it must also be free, in as much as this is possible, from fear of censure for offending, as censure breeds a reluctance to speak what we believe is true (or what we just feel like saying). Art must never be reigned in by any political agenda. Art is entirely free to speak and draw blood and tears and weave anxiety or it isn't art. Art is a trigger.

Now, I need to sleep. 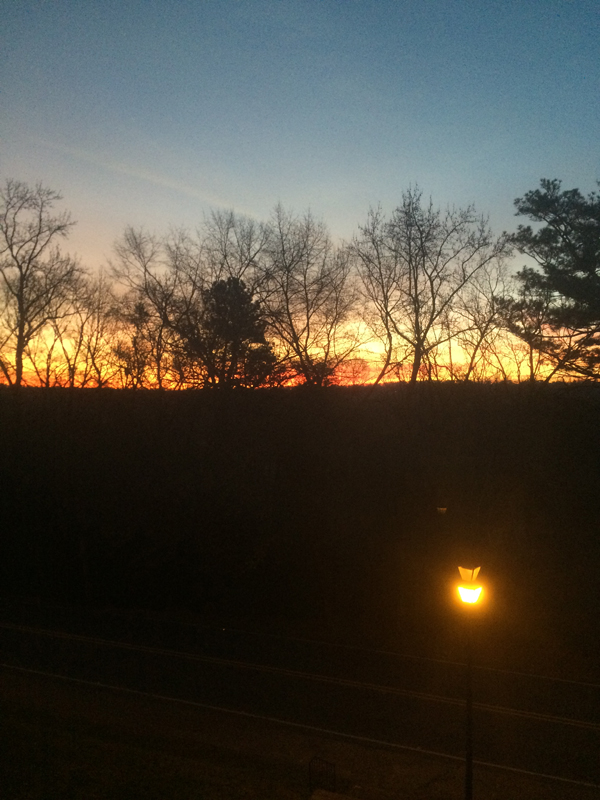 I found these graphics at the New York Times and I thought it should share. It really drive home the point of what we're coping with up here. Spooky is referring to the Northeast as "the New Arctic." The images are behind the cut. These are composite from 60 individual images via the the MODIS Satellite for the month of February 2015.

Well, my magic toenail, all the colors of a ripening blackberry, has not yet killed me.

We're getting ready for Winter Storm Marcus. After Linus. After the Blizzard of 2015. Three winter storms in less than three weeks. Until the autumn of 2012, winter storms didn't have names. That's the work of the Weather Channel. Not all meteorologists approve. To quote meteorologist Paul Yaeger:

...the point is that some people will use the Weather Channel names for winter storms, some won't, and others will use their own names. And the criteria for what makes a storm worthy of a name will not be as precise as the naming convention for hurricanes.

The Weather Channel claims that naming storms would provide the same benefits as naming hurricanes, but they've been in the business long enough to know better. Those benefits would only result from a NOAA-instituted naming convention that mirrored the one for hurricanes – a consistent system used by one and all.

Me, I have serious reservations about the wisdom of naming a storm after the Roman god of war.

In the last two days, having finished "The Cripple and the Starfish" and gotten Sirenia Digest #108 out the door, I've returned to work on the screenplay, and it's going well. There will, I think, be details forthcoming in the next two or three weeks.

I somehow missed this little gem, when I was relaying my Facebook "status" posts back on the 4th (posts from the day before):

I'm honestly waiting for one of the "socialist justice warriors" to tell me that I'm "really just a man" because I am at odds with their hysterical, bullying brands of feminism and liberalism. Actually, they've likely done it already.

And if they haven't, I can always rely on the "TERFs" (transgender exclusionary radical feminists, aka the Westboro Baptist Church of feminism).

This has become a long post a very short paragraphs. I really hate those.

Postscript: There is no shame in mocking those who have chosen to remain in the darkness of ignorance, especially if by so doing you dissuade others from joining them.

I'm 99.5% convinced that to swim regularly in Rhode Island I'm going to have to 1) overcome my fear of tourons and 2) invest in a neoprene wetsuit. The first merely requires willpower. The second, it turns out, is reasonably priced. Maybe it's time for the "Buy Caitlín a Protective Layer of Simulated Subcutaneous Blubber" eBay auction. I am completely serious.

Yesterday, I wrote a very respectable 1,898 words on "One Tree Hill (The World As Cataclysm)," and found THE END. At 6,886 words, it's quite a bit longer than the vignette I'd originally imagined it as. So, this month, Sirenia Digest subscribers will get a full-length short story...and maybe something else. Maybe. I am so amazingly behind I'll probably still be staring at my ass this time next year. Anyway, this story is...different. Or it feels different to me. More influenced than usual by Arthur Machen, perhaps. It's quiet.

I awoke to the old familiar numbness/pain cocktail sloshing about in my feet. It was sort of a surprise. Mostly, they're fine these days. The numbness never goes away, but the pain is rarely evident. Today, BLAM. Up past my ankles. Perhaps it's the approaching storm. I would not be surprised if, here in coastal New England, my feet are better at forecasting the weather than are meteorologists.

I want to thank everyone who commented yesterday. It is heartening to hear likeminded individuals, and to have not yet been decapitated by ravenous, lockstepping army ants in the charge of the Art Police. There were some points made in the comments, good points, I want to pick up and expand upon. But not today. My feet hurt, I want to be swimming, there's a storm coming, I don't know what has to be written next, and...other stuff. Maybe later this week.

It might be sunny today. The forecasters say it will be sunny in Providence, but so far, only clouds. They also say tomorrow will be sunny, with a high of 72F, but then, they say, we get seven straight days of rain. I suspect they'll be right as regards generalities, but mistaken on many particulars. Meteorologists in New England should be known only as "forecasters." They belong in the same class as astrologers, chiromancers, numerologists, and all those people who claim to have predicted momentous events, but only after the momentous events have occurred. The only way to be sure what the weather's doing up here is to look out the window. Regardless, I do miss some semblance of summer, and I'm beginning to hear longtime locals grouse about this wet, cold weather, so I know it's not just me.

Another decent nights sleep, aside from the dreams. The dreams seemed far more real, more immediate and tangible, than anything that's happened since I woke.

Yesterday, having shelved "The Alchemist's Daughter," I turned to a piece I'm calling "The Mermaid of the Concrete Ocean." I wrote 1,047 words. This one has to work, because there's no more time for false leads.

I meant to mention, the woman who will be playing Constance Hopkins in the book trailer for The Red Tree is a painter named Amy Clay. Follow that link, and you can see some of her work.

Also, the eBay auctions continue apace, even in years without a summer, so please do have a look.

Today, I only want to be near the sea.

Hopefully, everyone now has Sirenia Digest #4. Thank you, Gordon. Thank you, Spooky. Thank you, Vince and Ted and Bill. And a big thank you to all the subscribers. If you're not a subscriber, you may yet remedy that simply by following this link.

Lately I've been feeling like I'd miss at least half of everything interesting that's going on in the world were it not for attentive bloggers like Paul T. Riddell (

sclerotic_rings). I sit in this little room surrounded by mute and memorized books. I tell my stories. And it often seems that the real wonders are passing me by while I try to spit up their surrogates. Today, for example, the news of red rains over India way back in 2001 and the scientific investigations thereof, and you'd think I'd have heard of this before now. Red rains were quite close to Charles Fort's heart, and in The Book of the Damned (1919), after cataloging documented example after documented example of red rains, he speculated, in his marvelous and brazen and inflammatory way:

Or that our whole solar system is a living thing: that showers of blood upon this earth are its internal hemorrhages —

The first time I read these lines, they gave me nightmares. They still give me chills. But beyond the power of the prose the mystery remained. Why do red rains fall? And now, eighty-seven years after the publication of The Book of the Damned, it's possible that an answer may have been found for at least some of these skyfalls. And, even more surprising, it at least echoes those lines that Fort wrote all those decades ago. Today Paul wrote of a cover story from New Scientist a couple of weeks back:

A beautiful example of the humanity of science came with a cover story a couple of weeks ago on a red rain in India in 2001: according to researchers involved with studying the contents of that red rain, the coloration was due to living cells in the rain, and the suggestion in the upcoming paper is that these cells may have been brought to Earth in a meteorite airburst. You have it all: an extraordinary theory that awaits the extraordinary evidence to prove it, countertheories that are more outrageous than the original theory, and the understanding, all the way through, that what's needed is more study before anyone can make a final evaluation. Even if the red rain has a prosaic explanation, half of the fun is knowing instead of shrugging.

The scientific paper which Paul speaks of is titled "The red rain phenomenon of Kerala and its possible extraterrestrial origin," by Godfrey Louis and A. Santhosh Kumar (Mahatma Gandhi University, Kottayam, India). It has been accepted for publication in the peer-reviewed journal, Astrophysics and Space Science. Here's the abstract, which surely would have made Fort give up a wry smile:

A red rain phenomenon occurred in Kerala, India starting from 25th July 2001, in which the rainwater appeared coloured in various localized places that are spread over a few hundred kilometers in Kerala. Maximum cases were reported during the first 10 days and isolated cases were found to occur for about 2 months. The striking red colouration of the rainwater was found to be due to the suspension of microscopic red particles having the appearance of biological cells. These particles have no similarity with usual desert dust. An estimated minimum quantity of 50,000 kg of red particles has fallen from the sky through red rain. An analysis of this strange phenomenon further shows that the conventional atmospheric transport processes like dust storms etc. cannot explain this phenomenon. The electron microscopic study of the red particles shows fine cell structure indicating their biological cell like nature. EDAX analysis shows that the major elements present in these cell like particles are carbon and oxygen. Strangely, a test for DNA using Ethidium Bromide dye fluorescence technique indicates absence of DNA in these cells. In the context of a suspected link between a meteor airburst event and the red rain, the possibility for the extraterrestrial origin of these particles from cometary fragments is discussed.

If you'd like to read the full paper, you can download a PDF here. And on that note, it's time for me to wander away to bed and dream of the things which may well live between the worlds.
Collapse