This morning (drum roll, fanfare of brass instruments, all that) I wrote the first 1,123 words of what I am fairly certainly is not a false start for The Night Watchers. I figure the first 10k words will prove me right or wrong. I'm aiming to write a minimum of 1k words/per day at least six days a week. At that rate, if all goes well, the book will be done a little after Xmas. I very much like what I wrote this morning and so does Spooky. She said, "It feels like the beginning of a movie that's gonna be quite a ride."

And then I worked on Winifred, and there was an accident that...you know, I'm gonna explain that tomorrow. Right now I'm kinda rushed, and I do not want to shortchange the slapstick value.

But speaking of paleontology, I said on Twitter today, "Starting to look like 2022 (Toronto) will be my first go at an SVP presentation since '87 (Philly). That was a platform session, this will likely be a poster session. That was mosasur biostratigraphy, this will be mosasaur...well that's a secret. But talk about an unconformity!" and "But FIRST I have to finish The Night Watchers, my next novel, in order to 'earn' that SVP presentation." I can't even imagine at what will be a virtual scientific conference, but I guess that bridge will be crossed when we come to it.

It occurs to me (since I can't stop talking politics), that Trump is pretty much just a far dumber Adoplh Hitler for a vastly dumber bunch of assholes. Likewise, QAnon is just far dumber version of "The Protocols of the Elders of Zion," though of course QAnon does manage to incorporate that hoaxed document in its surreal rabbit-hole ideology. But with alien lizard people and pizzagate and chemtrails and stolen elections and, you know, all that crap.

From Facebook (yesterday): "When you believe that we stand such a crossroads, with America having, at most, another 3 years before the curtain comes crashing down on this democracy, to be replaced by TrumpLand/Far Right fascism and the end of free elections, how does one simply live their life day to day? How do they have the heart remaining to divide their time between such pursuits as fantasy novels and an admittedly "luxury" science? I do not have that heart, and I am too old and tired and ill to fight. I can think only of escape plans. And if I am judged for this by some future generation that might survive, well, that's just how it goes. Fuck 'em."

Please have a look at the current eBay auctions. Vielen Danke. These auctions are currently saving mine and Spooky's butts. And she put some new books up today.

Also! My Tater Bean shirt arrived yesterday, from the glorious weirdness that is VanderWild. I'm gonna be living in this shirt for a while. The photo somehow selectively bleeds out the colour. The possum is appropriately psychedelic, but you can hardly tell the shirt itself is pink. But look at the sleeves. Now, go order one for yourself, every one of you. Proceeds go to save critters. 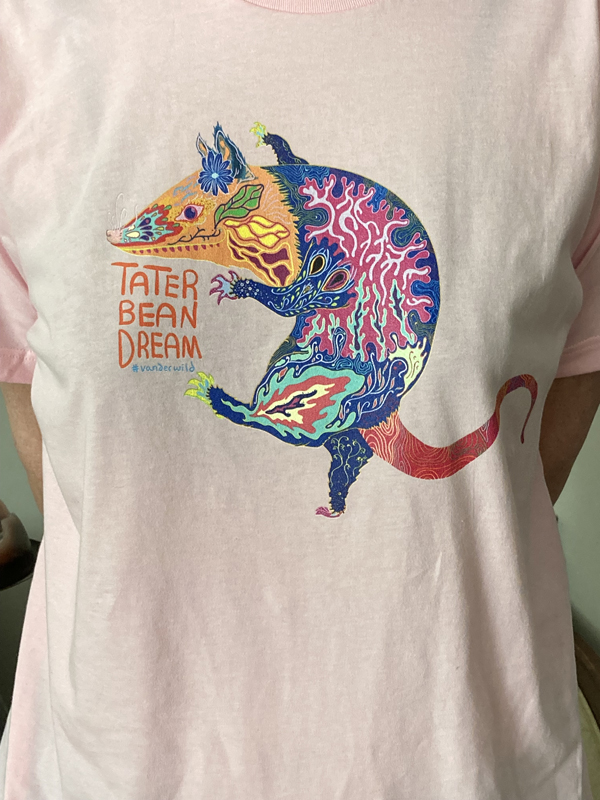