There was actually sun today, about midday, for maybe an hour. The clouds parted and there was sun and warmth. It didn't last, but it was nice while it did. Later, there was thunder. Our high was 84˚F, with a heat index of 90˚F.

I'm not exactly sure how today so completely jumped the rails, but it did, and I was, for the most part, a useless mess. I did talk with one of my lit agents, and I managed to translate two long paragraphs of John Campbell Merriam's "Ueber die Pythonomorphen der Kansas-Kreide" (1894) from German to English. Campbell was – is – a fascinating man. Born in Hopkinton, Iowa in 1869, he studied paleontology at the University of California before moving to Munich to study under the brilliant paleontologist Karl von Zittel. The same year his aforementioned work on mosasaurs was published, he left Germany and returned to California, where he took a teaching position at UC. Among Merriam's many, many accomplishments, he studied the fauna of the La Brea tar pits extensively, naming such animals as the sabertooth cat Smilodon.

Translating German is much easier for me than translating Portuguese (which I was doing a couple of months back).

And speaking of paleontology, I got the news today that my application has been accepted, and I am now officially a Research Associate of Vertebrate Paleontology at the University of Alabama Museum of Natural History (yes, I'm still also at McWane). That news and the sunlight made the day endurable.

Today, Chris ("Sissy") said to me, "I've known a lot of people who 'were born in the wrong time,' but you're the only one I've ever thought meant it."* Which led me to reply:

I was thinking, if I believed in souls, and if I believed in reincarnation of some sort, I might be tempted to say that there are some souls that are sticky, with regards to time, that something about time adheres to them. So, they drag time forward (quantum entanglement?), and, in a sense, are stuck. Like running through a spider web and having bits of it stick to you and trail after you. I believe none of this mystical claptrap, of course.

Instead, I have to look to biospychology and psychiatry for some possible explanation of my temporal dysphoria.

Today's photo is a scene from one of mine and Chris' Second Life RP sessions, Nikola Elsa Weisz-Ducheski (foreground, left) and Nikola's mother, Magdalena, in 1940's Paris, during WWII and the Nazi occupation. I have been having to cut back on lately. Alas. In the right hands, SL is a great storytelling tool. In the wrong hands, in most hands, it's just more crap on the internet. 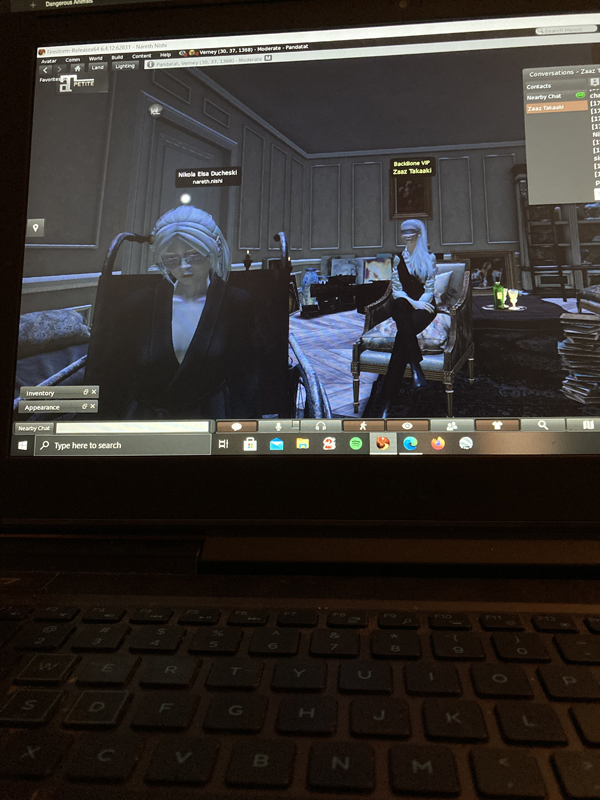