I just was not up to a journal entry yesterday. Trust me, you didn't miss much.

This Martin Luther King, Jr. quote: “The arc of the moral universe is long, but it bends toward justice.” Now, I used to believe that with all my heart and mind. I would also say "and soul" if I did not think soul is merely a subset of mind. I believed it passionately, that quote, and it pulled me through many dark days and nights. As a student of history, overall, it seemed to be true. But beginning June 2016 "Brexit" referendum (and a bunch of other crap right about then), I felt such a violent shift towards isolationism, populism, and fascism (on the right and the left) that whatever faith I had in King's words was severely shaken. And now, in mid 2021, after the murderous, impossible fact of a Trump presidency and all its attendant horrors, and after...well, let's just say the ongoing "dumpster fire" (man, I hate that phrase) that is now Western Civilization, let's just say that my former belief, that King had been granted with some special insight into an overall direction of history and that it moved towards justice, that shit's gone.

We stand on the precipice of a new fascism. One only has to look at Texas, which is striving hard to be the epicenter. The new anti-abortion law that turns every Texan into a potential snitch to be rewarded $10k for reporting suspected abortion. The attempts in Texas to entirely dismantle free election. This is really happening. We will see it writ large in 2022 and in 2024.

I don't know where this is leading. I'm very tired. I slept about four hours last night, all told. That includes the hour I after I got out of be at 6:00 a.m., then said fuck this and went back to bed sometime after 7 and slept until about 8:30 a.m. So, coherence is not really my thing right now. But I have spent years now not saying what I think, and my resolve to keep my mouth shut and go with the flow in crumbling.

“The arc of the moral universe is long, but it bends toward justice.” No, I just do not think so. Not anymore. I think the 20th Century was an amazing thing, and, tragically, it will be a long time before we see its like again. If ever.

I did get some paleo' work done today. I worked a while this morning finding the right concentration of formic acid (CH2O2) that would allow me to approach preparation of the inconveniently hard matrix in which "Winifred" is entombed using a mix of mechanical and chemical prep methods. And I seem to have had success at 5% formic (diluted by H2O). Maybe more on this later. I read a couple of mosasaur papers.

This morning I finished Richard Rhoads' The Making of the Atomic Bomb and began Donna Tartt's The Goldfinch.

Among the many strange things that are being done to the English language by the Twenty-First Century, the mind-numbing refrain, the omnipresent idiom "not okay." As in, "that's not okay," "this is not okay," ad nasueum. Like, the most milksop way possible to express your displeasure, as if we cannot rise above a mother scolding her five year old level of disapproval. "Now, now. That's not okay." LOTS of shit is far fucking worse than "not okay." I have noticed if someone feels especially strongly, a thing might be *definitely* or (shudder) *super* not okay. But that's strong language....

Last night we finished Season One of Your Honor, set in contemporary New Orleans, and it's hard to believe that a second season can emerge from the ruins of those horrific events. But we'll see. It really is quite an excellent series, even if the plot is all but crippled by a reliance on a plethora of increasingly unlikely coincidences to get where it's going. And then we began City on the Hill, set in early 90s Boston, which I think is going to turn out to be the better of the two shows.

Last night, I had a dinner of cold roast beef, rye bread, guacamole, and provolone. I suppose some asshole foodie might call it a "deconstructed sandwich." Sure, fine, whatever.

Oh, before I end this abominably long entry, here's the eBay link. Yes, I am willing to sign and personalize all the books we sell. Oh, and that copy of the Brazilian edition (Portuguese language) of Two Worlds and In Between. It's something very special. 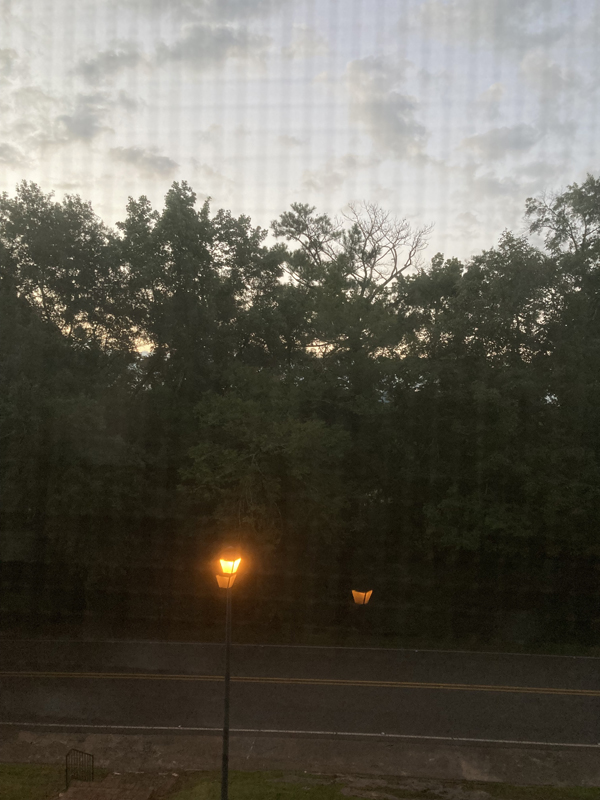