I asked for the rain to leave, and today it seems, so far, to have done just that. The sun is shining. Currently, it's 79˚F.

This afternoon's comfort film was Alex Proyas' brilliant Dark City (1998). If you have not ever seen the July 2008 director's cut, you truly have not seen the film. The studio butchered Proyas' film at least as badly as the hatchet job that was done on Blade Runner. The director's cut removes exposition, restores plot and characterization, and generally takes the amazing (but flawed) thing we saw in theaters and gives us Proyas' actual vision. One of the most baffling disappointments of latter 20th Century Hollywood was that Proyas never again came even remotely close to again delivering this sort of cinematic gem. Perhaps if the world had originally been given a chance to see Dark City as it was meant to be seen and if the studio had been a little more supportive...but no.

The postman brought a mountain of boxes today: From Subterranean Press, ARCs of both Vile Affections and Cambrian Tales, and from Writers House (my lit agent), CD copies of Blackstone Audio's ten exquisite audiobook productions of (ten of) my short fiction collections. So, all that stuff has to be schelped up the stairs, and the house is full, and the storage unit is full, and it doesn't help that we once again have a house full of food as we move into another lockdown. So, watch for eBay auctions soon. In fact, the Cambrian Tales ARCs will soon be a rarity, as SubPress is sending out very, very few copies.

And I spent about three hours doing long-overdue maintenance of Luthíen, my iMac, much of which consisted of dumping old files and applications. Suddenly, she's running much more like she ran when she was new, back in 2012.

So, in all ways, yes, this was a better and more productive day than yesterday. 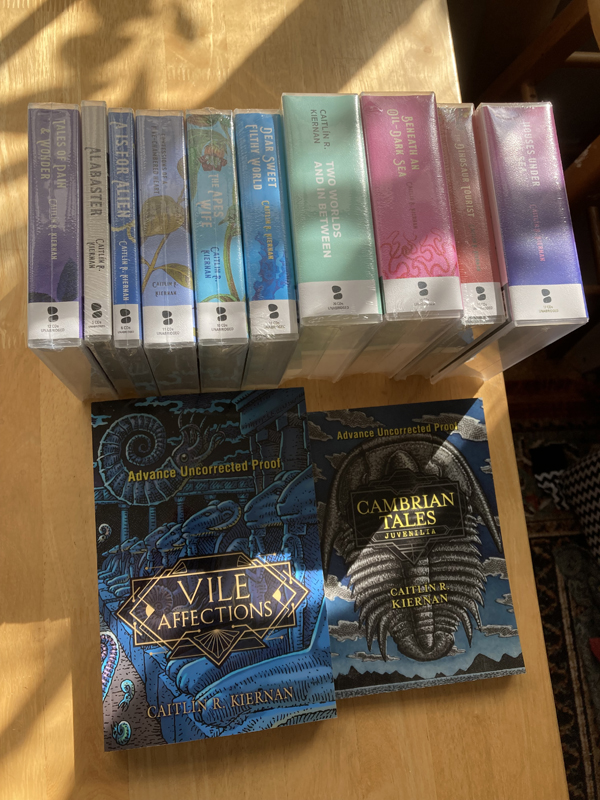