Sunny again today, but still with some clouds. Our high was, and presently is (so our high so far), 87˚F, with the heat index at 92˚F.

I woke at six this morning, which was earlier than I'd intended. But what the fuck, I'd gotten to sleep by midnight, so I figured I'd get up, have some breakfast, then get to work. And, instead, I fell the fuck back to sleep and woke at 8 a.m. Because I am a creature of excruciating habit, or excruciatingly a creature of habit, this threw the whole day into a less than productive tailspin. I finally gave up and played Guild Wars 2 and tried not the think about the words I did not get written today.

What am I writing? Fuck it, I'll tell you. The novel is called The Night Watchers, and it is essentially a new and more supernatural incarnation of the novel that would have been Interstate Love Song (based on the short-story of the same title). I really like it, all of it that's in my head, and that's a lot of it. If I can quit fucking around, it could be done by the end of the summer. The print and ebook versions will be published by Subterranean Press, and hopefully there will be an audiobook. Likely there will. It's set mostly in and around north-central Alabama, but spans many, many decades. The title is borrowed from Peter Straub's Ghost Story, one of my favorite books of all time, ever.

But you knew that about me and Ghost Story. I mean, if you are one of those Constant Readers.

But I gotta admit, balancing the fiction, no matter how much I like the novel at hand, with the sudden and marvelous paleontology opportunities is a challenge. But. Fiction keeps the rent paid and the lights on and food on the table. Paleontology just, you know, makes me feel like I'm doing what I was put on earth to do. And it's all sort of ironic. For me - as frustrating as I might find it, as much as I would usually rather be doing something else - writing is easy as pie. On the other hand, paleontology is fucking hard work – and I'm not talking about physically demanding fieldwork and fossil preparation. I'm talking about the intellectual rigor, discipline, and plain ol' smarts involved. So, I'm going to be busting my butt to do the fairly easy thing that pays the bills to earn the luxury of busting my butt to do the very hard thing that pays not one red cent. Irony. But, that said, I am just grateful for both opportunities, at this point in my life and at this point in history.

By the way, SubPress has announced Vile Affections (and the accompanying chapbook Cambrian Tales), and you may see the cover. In fact, you can now place preorders! Right here. Note: Only those who bought the signed numbered edition of Comes a Pale Rider may preorder the signed numbered edition of Vile Affections at this time. Anyone may preorder the trade hardcover.

I'm just waiting for one of these anti-COVID vaccine yahoos to realize that, in effect, every time they use any medication they are – in the eyes of pharmaceutical companies and medical science – essentially guinea pigs or lab rats or Rhesus monkeys, FDA approval or no.

Fact: When you are so afraid that you can only win an election when fewer people vote, so you try to make it harder and harder for folks to vote, especially those whom you suspect won't vote for you, you've failed democracy.

~ and this, which someone else said and which I retweeted ~

Let's perfectly clear...Democrats do not want to de-fund the police. Dems want to demilitarize and de-brutalize the police.

I leave you with my level 80 holosmith (an elite engineering specialization), Mandy J. Wolowitz (née Hansen), at Timberline Falls. Yes, she has a lightsaber. 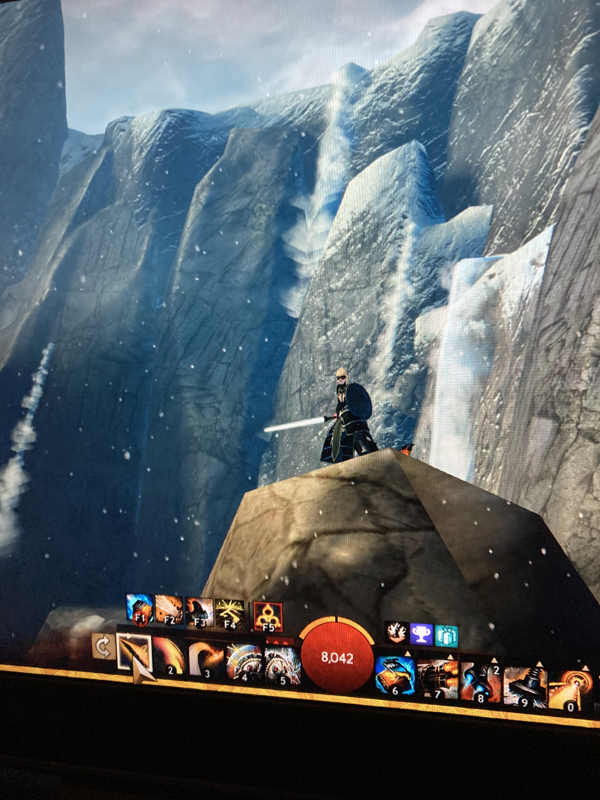