This one really should have been titled "Science Smells Like Pickles," because I spent a chunk of the day soaking fossil bones in dilute acetic acid. But anyway...

The heat continued today. I think we topped out at 92˚F, with a heat index of 102˚F. But cooler weather is coming, cooler weather and rain, spinning off Tropical Storm Barry. I am worrying for folks in Louisiana.

This isn't going to be as good an entry as last night, I can tell. I got to the museum a little before 10 a.m., then spent almost six hours doing prep on the left lower jaw of Alfred the tylosaur today, and I'm wiped out. The first three hours were manual labor, mechanical prep, getting the last bits of chalk off the coronoid and splenial (those taco bones I talked about earlier), and then there was the acid bath, which I always find stressful, as I expect the bones to just come apart in the acid. They didn't, of course, because I'm actually a better preparator than that (if I do say so myself). So, next up is the rest of the back half of the left lower jaw (the angular, surangular, prearcticular,and articular, which are still all stuck together in life position), and it's going to be a big job. That section of bone is about two feet long, and it's got about a million cracks in it. Okay, maybe only half a million. By the way, I estimate I've put in about 30-35 hours on the two taco bones so far, and they still need a good coat of Butvar for consolidation.

Please have a look at the current eBay auctions! Thanks!

Tomorrow, I put together Sirenia Digest #162 (and I owe Bill Schafer at least two emails), which will include the new story "Untitled 44," which is actually about a photograph titled "Untitled 44."

I leave you with a photo of some of the bones yet to be prepared, still in their plaster field jacket. 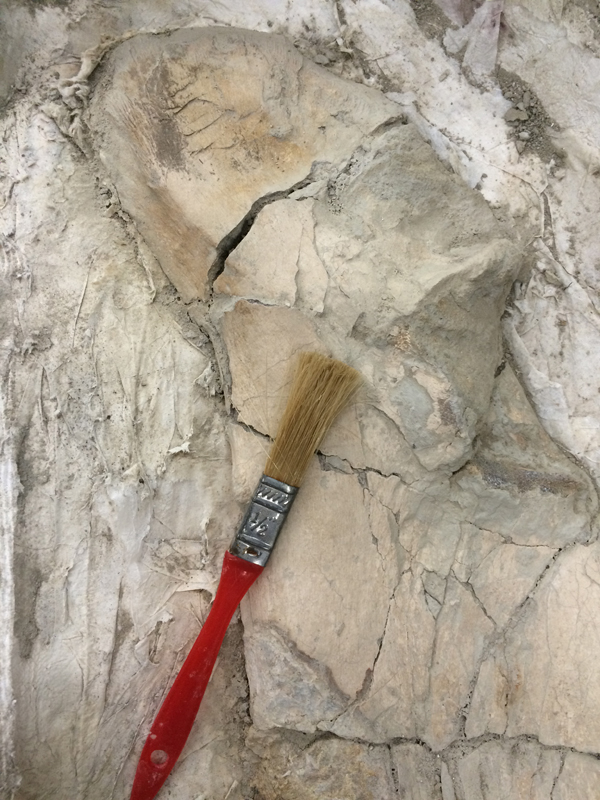