I'm too sad and stunned to say anything worth saying about Notre Dame. Maybe later.

Today is the 15th anniversary of this LiveJournal, begun on this date in 2004. This will be entry No. 5,667, an entry for most days. If you'd told me I'd still be posting here after a decade and a half, I'd have at least hoped you were mistaken, and yet here I am.

Anyway, this was a strange, strange day, and some of it was very good, and some of it was terrible, and some of it was just fucking annoying. I've already mentioned the terrible thing, and I'll be coming back to the annoying thing in another entry (when the dust settles), so I will confine myself to the very good thing. Spooky and I drove out to my mom's in Leeds this morning to recover from her garage a fossil turtle (and associated specimens) that I collected from an outcrop of the Upper Cretaceous-aged Demopolis Chalk in Sumter County way, way back in November of 2001 and April of 2002. Then we headed back to Birmingham, and we met with Jun Ebersole at McWane at 2 p.m. Turns out, it's a turtle of special significance, at least a new species and maybe a new genus, and I'll be coauthoring a paper on it with Jun and one of his grad students, Andrew Gentry. This would have been plenty to make today wonderful, but while we were sorting through the turtle bones, we turned up a cheekbone (jugal) of a juvenile basal hadrosaur ("duck-billed dinosaur") that I hadn't even realized I'd collected! It represents a species very near to Lophorothon atopus and (possibly the same as) the recently described Eotrachodon orientalis. The holotype skull of the latter was spread out on a table at the lab and Jun walked over and held my bone up to the corresponding bone on the holotype and...there it was. So, fossil-wise, a fine, fine day, indeed. This is probably the first hadrosaur bone known from the Bluffport Marl Member of the Demopolis Chalk and one of the few dinosaurs from any part of the Demopolis. Those specimens went with me to Atlanta and then to Providence and then back to Alabama. They're some well traveled fossils.

Anyway, we were at McWane until about 4:30, then there was a stop by the UPS Store and the Piggly Wiggly and then home again.

I'd be leaving you with a cool photo Spooky took of Eotrachodon, but I just accidentally (????!!!!) deleted it from the phone, instead of mailing it to myself. First time I've ever done that (and it wasn't backed up to "the cloud.") So, you get sunset outside my office window, instead. Sorry. 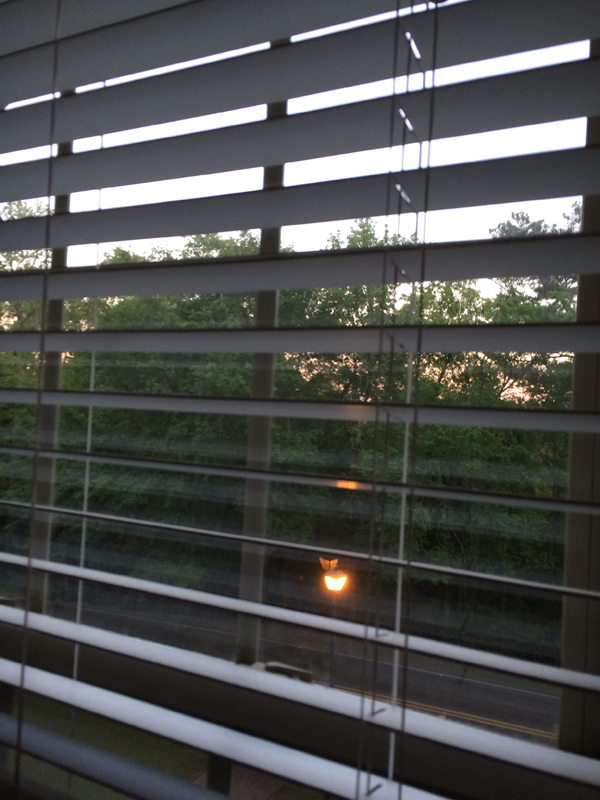