I was awake before seven a.m., but...I was in bed by 11:30 p.m. This whole getting up early thing is weird, after years of being so nocturnal, but it might not be a bad thing. Just weird.

Yesterday, I wrote 1,029 words on the noir and found THE END. I still don't have a title, which is one thing I have to do today. And proofread it. I sent it to Sonya yesterday afternoon, and she likes it. I hope the editor does. I also need to talk with Ted Naifeh today about an upcoming project and get serious about the proofreading for Tachyon. But I also need a break, after finishing that story. I want to go to Atlanta, and I want to go to Athens. There are things and places and people I need to see again.

I need a lot more energy than I have.

Here's a question I was asked on Facebook. I'll answer it here: I have a small question for you, if you wouldn’t mind. In VanderMeer’s Wonderbook, it says you perfect each paragraph and each scene. How do you do that without getting writer’s block? Do you have your plot already in mind?

Yes, that's how I've always worked. Like most every other writer, I get blocked at times. I've never felt like my process makes me any more susceptible to it than the process of any other writer. As for the plot, sometimes yes, but most times no. As many know, I'm not nearly as concerned with plot as I am with characterization and mood and language. Often, plot bores me. That said, I tend to allow it to unfold as I write a story. One event leads naturally to another. One scene is the consequence of all the scenes before it, not (usually) something I have worked out ahead of time.

And this reminds me of a quote I posted to Facebook a few days ago, one that I felt has a lot to say to readers who are confused by some of my books. Black Helicopters, for example. Maybe it will prove enlightening. Maybe not:

"The difference is that in the traditional detective novel there must be a solution, whereas in ours there is just the principle of investigation. Detective novels are consumer products, sold by millions, and are made in the following way: there are clues to an event, say a murder, and someone comes along and puts the the pieces together in order that truth may be revealed. Then it all makes sense. In our novels what is missing is 'sense.' There is a constant appeal to sense, but it remains unfulfilled, because the pieces keep moving and shifting and when 'sense' appears it is transitory. Therefore, what is important is not to discover the truth at the end of the investigation, but the process itself." ~ Alain Robbe-Grillet

We had a good walk at the Botanical Gardens yesterday, but a storm was brewing, and we had to cut it short. Still, we saw a swarm of baby toads, each small enough to fit on a dime, and the turtles and the koi and cavorting chipmunks. Afterwards, leaving Piggly Wiggly, we were caught in the downpour. It was a glorious rain.

Last night, we watched John Ford's magnificent The Searchers (1956), likely the greatest of all John Wayne's accomplishments and one of my favorite westerns. 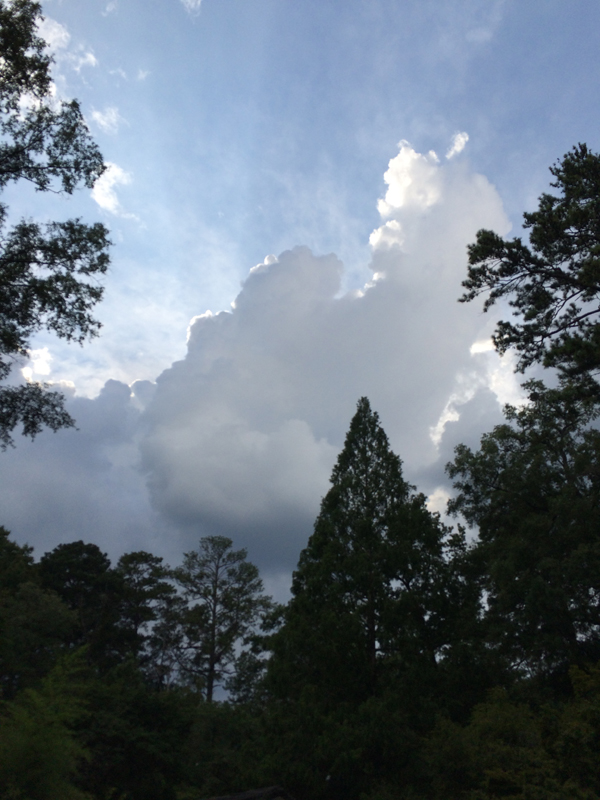