A hot day today, after a cooler day yesterday. Currently, it's 86˚F, with the heat index at 93˚F.

Yesterday, not writing work, aside from some email. We took two big loads of stuff to the Harris Building. There was a dead gecko on the loading dock. When I was young, there were no geckos native to this part of the southeast, but the exotic pet trade and climate change has changed that. Hemidactylus turcicus, the Mediterranean (or Turkish) house gecko has established a foothold, and that what our tiny dead gecko was yesterday. It was an odd thing to see, lying there on the concrete. I took a photo I'll use tomorrow. I worry that the geckos might be a threat to the native anoles.

From Facebook, yesterday morning: Kathryn just unearthed a box of correspondence dating from about 1993 to 1997, mostly the Athens years, and I made the mistake of looking through it. Letters from people I have lost or haven't lost, but they're all very far away now. And I have to find a way not to sit here and cry all afternoon over old letters. And I can't help thinking how I was a better person back then. So, don't say I never "overshared."

Those letters and photographs sort of threw me for the whole day. And then, at the storage unit, I locate a cache of my old clothing, which included several beloved T-shirts from the eighties I thought I'd lost long ago. But there they were, in amazingly good condition (because I stopped wearing them in 1989). Shirts from two meetings of the Society of Vertebrate Paleontology (Rapid City in '85 and Philadelphia in '86), the Bill the Cat shirt I got at the Atlanta Fantasy Fair in 1985, a dinosaur T-shirt from the Smithsonian, and a shirt from the defunct Red Mountain Museum, where I worked, first as a volunteer and then as a paleontologist, from 1978 to 1986.

From Facebook this morning: On this day in July 1969 men first walked on the moon, at 9:56 p.m. CST. And my mother, wise woman that she is, made me and my sister sit up and watch. I was five years old.

We had a good walk yesterday evening, more than two miles along Shades Creek. Later, Spooky made spaghetti for dinner and we watched a documentary about Hedy Lamarr's invention of "signal hopping." Then I did a little RP.

Mars is bright in the southern sky right now. I watched it for a time last night. I wish I had an actual telescope.

Not sure what today will be, what's left of it. I need to get to work. I spent part of yesterday figuring out the things I have to do before the end of August, and it's intimidating, all that work. I have to shift my attention from moving to writing. 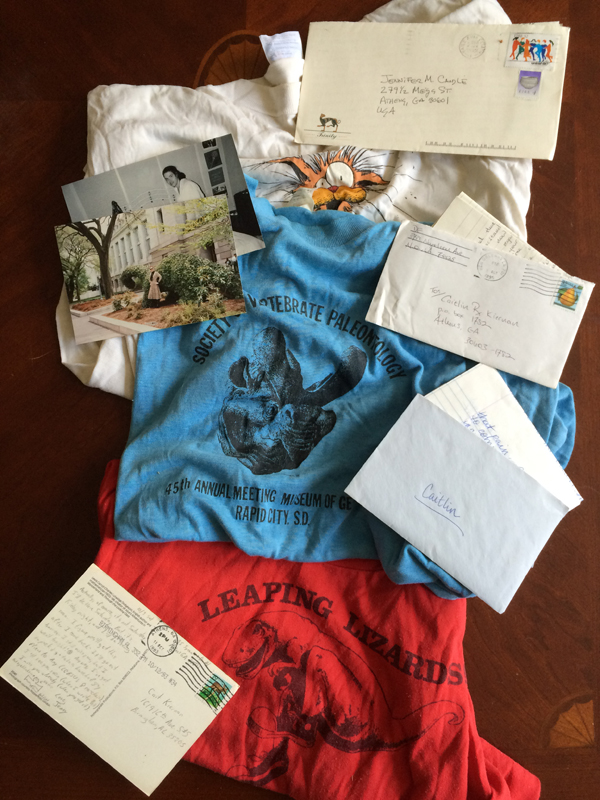