So, here on the first day of spring, Providence is under a winter storm warning, and we're about to be hit by the fourth nor'easter since March 1, only twenty days ago. We're looking at between seven and seventeen inches of snow. Fuck this. But I take it as Providence's parting shot. This is the last spring I will lose to New England. This time next year, I will be enjoying a warm, green spring. Anyway, it's currently 37˚F, with the windchill at 29˚F.

Yesterday, I had a mountain of email that piled up while I was writing "Virginia Story." I've gotten terrible about answering email. I'd apologize for that, but it would be an insincere apology. Oh, and I'll be doing at least one public appearance to mark the release of the Tor.com expanded edition of Black Helicopters, at Lovecraft Arts and Sciences here in Providence. I may have a second date in Rhode Island, but I'm not yet sure. These will be my last appearances in New England for a long, long time, and maybe forever. Okay, well probably not forever, if only because I'll undoubtedly have stuff at Brown University and the Hay from time to time. But still. Anyway, watch for details.

We're looking at June 17th as the date we've arrive at the new apartment.

Last night, we began a rewatch of both seasons of True Detective, and we made it through the first five episodes of Season One. Also, if you've not heard the news, a third season in now in production. 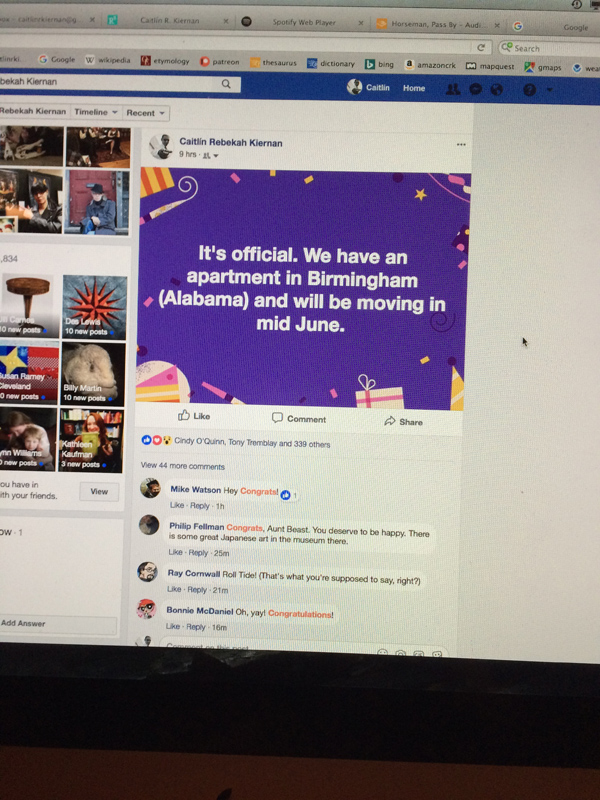