Yesterday it was either give in to the depression or put on the spacesuit and go Outside. I chose the latter. I'm fucking sick of letting the cold win. We drove across town to Eastside Market to get the makings for chili. Heaps of snow, four and five feet high, bracketing the narrow streets, icicles everywhere. The snow's getting that dirty post-storm look, turning brown with sand and salt and the hydrocarbon filth from passing automobiles. A few days more and it will be going black. The Providence River is frozen over, and there were drifts of snow on the solid water.

Back home, I finished a jigsaw puzzle and read and played a little Guild Wars 2. After dinner, we watched a few episodes of That 70s Show; we've reached Season 5 (of 8) in our Third Annual That 70s Show Watch-Through. Then we watched three more episodes of The Pacific, which we began night before last.

And I had a sort of epiphany regarding The Tindalos Asset, and it fixes one of the things that have kept me from moving forward. Of course, the greatest impediment has been this weather, but maybe that's about to break as well. I want to be working, if only because it's better than just sitting here.

There's a photo below, Providence looking like something from a Roland Emmerich apocalypse. I almost lost four fingers to frostbite, getting the shot through an open car window as we crossed the bridge, so treasure it. 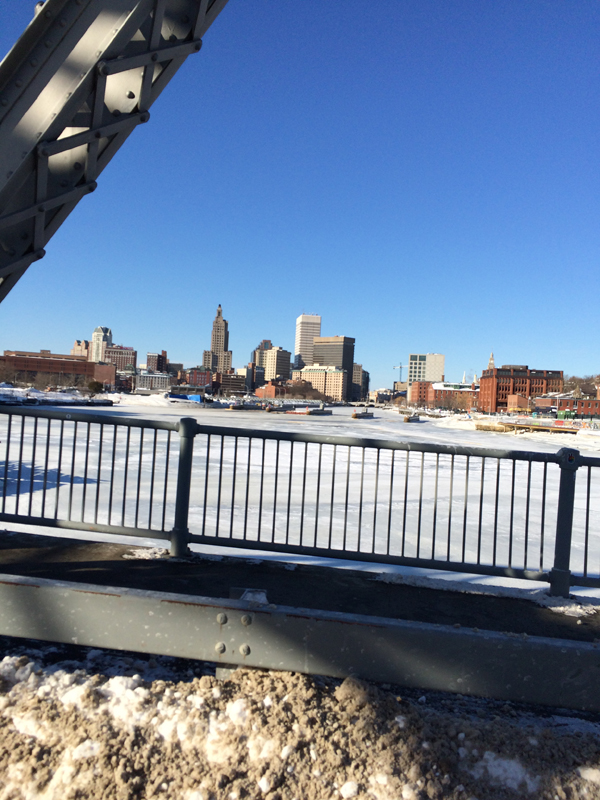