I'm battling a monster of a sinus headache today, but I am determined to at least get this journal entry posted.

Today is not only the 157th anniversary of the publication of Charles Darwin's On the Origin of Species by Means of Natural Selection, or the Preservation of Favoured Races in the Struggle for Life, it's also the beginning of Jethro Tull Season 2017-2018 and the sixteenth anniversary of my blog, begun on this date in 2001. I was a babe of thirty-seven, living in a loft in downtown Birmingham, Alabama, writing "From Cabinet 34, Drawer 6" and just getting started on Low Red Moon. There was, blessedly, as yet no such thing as "social media." Neil Gaiman convinced me that keeping a public journal could increase my readership. I don't think it ever turned that trick, but it did become a habit, and here we are.

Yesterday, I wrote 1,006 words on a new story. Once I swore I'd never write another vampire story. It's a promise I keep breaking. I broke it again yesterday. For now, the story is titled "King Laugh."

Also, I have entirely neglected to mention that on Monday Bill Schafer (Subterranean Press) and I began discussing my next short story collection, which I will likely call The Dinosaur Tourist and which would be released late in 2018.

Last night, Spooky made lasagna, we played Guild Wars 2, and we watched drag queens. I read "Gigantic pterosaurian remains from the Upper Cretaceous of Mongolia" and "New information on the cranial morphology of Avimimus (Theropoda: Oviraptorosauria)." And that was Thanksgiving.

So, on this auspicious day, I leave you with this view from the Red Room. That's Eir, the MacBook, there on the desk. 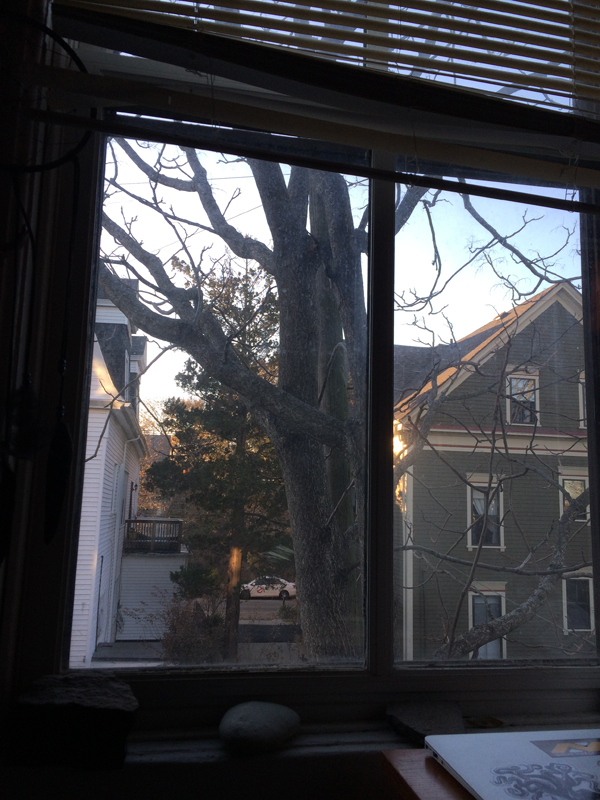