Sunny today, and my mood isn't quite so black. There's no logic to these things. Currently, it's 76˚F.

Yesterday, I began compiling the ms. for the Centipede Press ediion of Silk. I only made it through the first two chapters, because I was still getting the feel for the whole cut, paste, change margins, new indent, blah, blah, whatever. Today, I need to get through the rest. Or most of the rest. On Facebook, I posted "Working on the manuscript for the 20th anniversary edition of Silk, and I just want to travel back to 1993-1996 and smack that younger me in the fucking head, tell her to stop trying to be clever, stop being precious, stop romanticizing shit, and just fucking write. Also, it's a shock seeing that, when Chapter One was written (1994), cigarettes cost me only $2.50 a pack."* Later, I wrote "And if you were to ask me what it is I most love about Silk, twenty years later, I'd say it's the utter absence of computers, cellphones, email, 'social media,' and what have you. It has a glorious innocence, in that regard. It records the final years of an era."

Also, the Dancy Box came home. If you've read the short story "Bus Fair" or read the first volume of the Dancy graphic novels, Alabaster: Wolves, then you'll remember her cigar box. Though you may not have known it's a real thing in the real world that Spooky and I created in the autumn of 2010, and then we auctioned it for rather a large sum, to cover various expenses. The winning bidder was Mr. Steven Lubold, and Spooky sent the box to him of December 30th of 2010. But he recently graciously offered to donate it to the CRK Papers at the John Hay Library. So, yesterday it returned to us, after being away for 2,469 days, the better part of seven years. It will go to the Hay sometime this week or next, and it'll be displayed there when some changes are made to the exhibit later this month (the exhibit was planned to be sort of a two-part affair). Thank you, Steven so very much, first for paying so much for the Dancy box, then for taking such good care of it for so long, and finally for sending it back.

Yesterday, I read "First crocodile-tailed lizard (Squamata: Pan-Shinisaurus) from the Paleogene of Europe" in the most recent JVP. I've also been rereading Lord Dunsany's Time and the Gods (1906). Last night, we watched the first four episodes of Ozark, which is really very good. Four nights in a row now I've fallen asleep watching Robert Aldrich's The Flight of the Phoenix (1965), which is always been a favorite film of mine. I seem to be obsessed with it, all of a sudden. 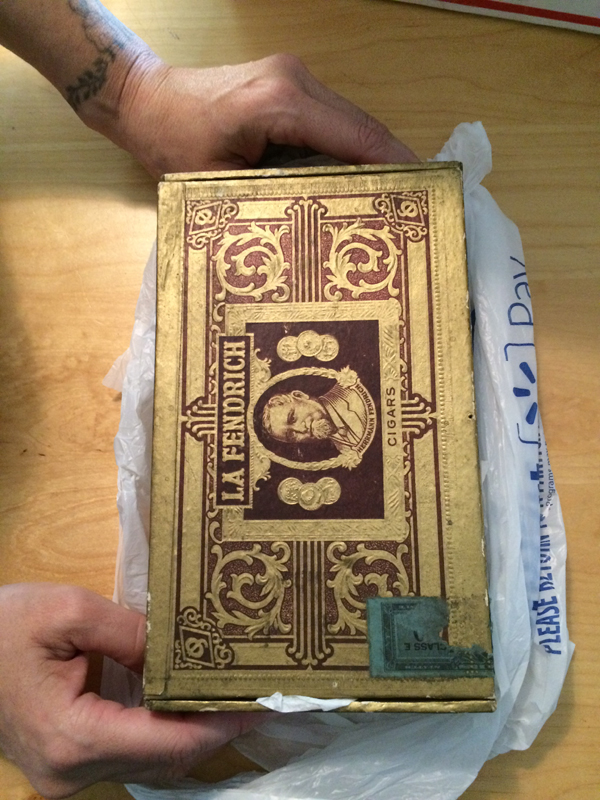 * Near as I can tell, the price given in the book is based on a cigarette machine at Jittery Joes in Athens, Georgia (the original Jittery Joes, by the 40 Watt Club on West Washington Street). The average price of a pack of cigarettes in 1993, when the book is nominally set and when I began it, was actually $1.69, but I often paid much more from machines). Today, cigarettes are much more expensive, of course, in the US having an average cost of $5.51 with the price in most states being between six and eight dollars. This number is taken from the combined prices of all of the states, but the actual numbers varying greatly with the most expensive cigarettes costing on average $12.85 (New York). In Providence, I pay about $8.95. And yet, smoking is a poor person's vice. (Figures based on an article at Fairreports.net, April 3, 2017 and personal observation.)
Collapse