Overcast and cold, currently 56˚F. There will likely be rain later today.

Yesterday, I wrestled with "Untitled Psychiatrist No. 3." Hopefully I'll have better luck today. The month has worn down to a stub.

Last night, we saw the first two episodes of the new season of Twin Peaks, and they were perfect. Also, the new episode of RuPaul's Drag Race is the first episode of Season Nine that I have actually enjoyed. Yesterday afternoon I took 25mg of hydrocodone and spent three hours yesterday afternoon working on a Charles Wysocki jigsaw puzzle.

I'm trying to wrap my brain around a rewrite of Chapter One of Interstate Love Song, and mostly I'm struggling with how to scrub from the narrator's voice all vestiges of what seem to me a sort of faux-naif. It may be I should be writing it in third person.

5/21 ~ We grow stronger in our beliefs only by having them questioned and challenged and by frequent exposure to competing beliefs, by confronting beliefs that may be even hostile to our own. We do not advance intellectually by hiding away in "safe spaces" where we are never asked to consider alternatives or defend the tenants of our worldviews or be made to feel uncomfortable. To demand that you be shielded from ideologies different from your own is not only cowardly, it is blatantly xenophobic. In the end, it is nothing short of the rejection of enlightenment for dogma. And it is the absolute height of hypocrisy to attend a university and then insist that you be protected from ideas. 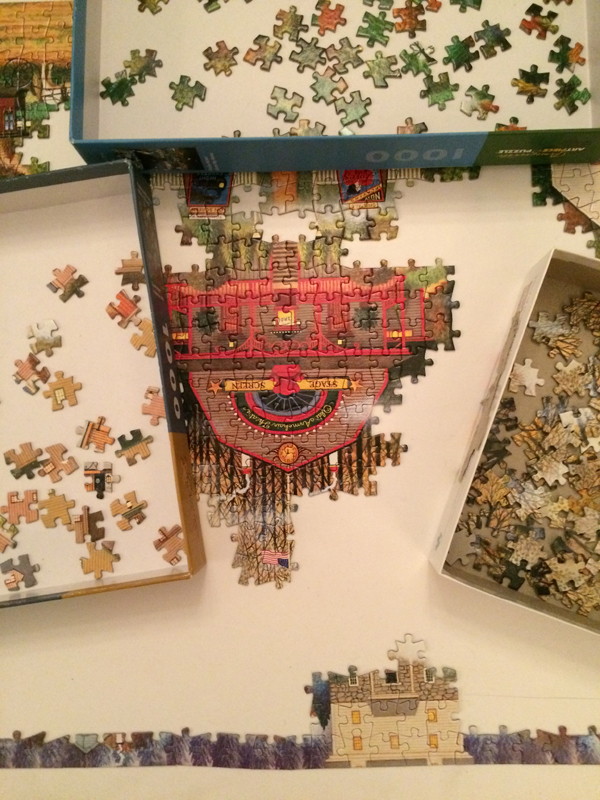