Overcast and chilly here in Providence. Currently, it's 53˚F, with the windchill at 48˚F. In Birmingham, it's 75˚F.

Another lost day yesterday, though not nearly so foul a day as was Wednesday. I've begun reading Cormac McCarthy's Suttree, and yesterday I read "The cranial osteology of Buitreraptor gonzalezorum Makovicky, ApesteguÍa, and AgnolÍn, 2005 (Theropoda, Dromaeosauridae)" in the new JVP, from the Late Cretaceous of Patagonia, Argentina." Last night, we watch the new episode of Archer and then tried to finish Season One in our Deadwood rewatch. These episodes that first aired in 2004 remain as brilliant and fresh as when they first aired. I didn't sleep much last night. Various things kept waking me, and it's bright daylight here by 5:30 a.m. this time of year, which helps nothing. The garbage men were throwing shit around by 5:30, too.

A salmagundi of thoughts originally posted to my Facebook over the last couple of days, because it's stuff I don't want to lose, and Facebook is so inherently ephemeral:

5/10 ~ I think I finally know how it felt to be Robert Neville (the protagonist of Richard Matheson's 1954 novel I Am Legend).

5/10 ~ One of the few comforts remaining in my life is jigsaw puzzles. They exist almost as a defiance of greater technologies than the printing press and a knife. There is at least that precious illusion. No batteries required. No electricity. No silicon. No WiFi.

5/10 ~ If I could not have remained a paleontologist, as I was meant to be, I ought have been a brick mason, like my grandfather. At least it would have been honest work and my hands would have stayed strong.

5/11 ~ I was born, at the least, fifty years too late, and maybe it was more like a hundred, and that's the thought that goes round and round in my head once a day or so.

5/11 ~ "Arc" seems to have been added to the list of words and concepts (like "agency" and "trope") misused and abused by Millennials and post-Millennials when discussing fiction and endeavoring to sound like a smart cookie . When did this obsession with character arcs begin? "Oh, but the author failed to develop the arcs of all her characters." "I didn't find the characters arcs satisfyingly handled." "It's sexist/racist/homophobic/colonialist/transphobic how the arc of Character X was left undeveloped." For fuck's sake, people. Just enjoy the damn stories and stop trying to be socially conscious little analysts. When the hell did it become cool to emulate literary theorists, who are surely among the most dry and tedious and ultimately irrelevant people on earth?

5/11 ~ If you're reading with a checklist in your mind, then you've missed the point. Doesn't matter if your checklist is political (left or right) or theoretical, it's a bullshit way to read and judge authors, and it entirely misses to point of literature. I say that as an author. I say that as a reader and a moviegoer. I say that as a storyteller.

5/11 ~ Facebook, you can take that purple flower of thankfulness and shove up right up your ass.

5/12 ~ For someone in whom the sky can often inspire such considerable anxiety, I spend an awful lot of time looking up.

And that's all I have for today. 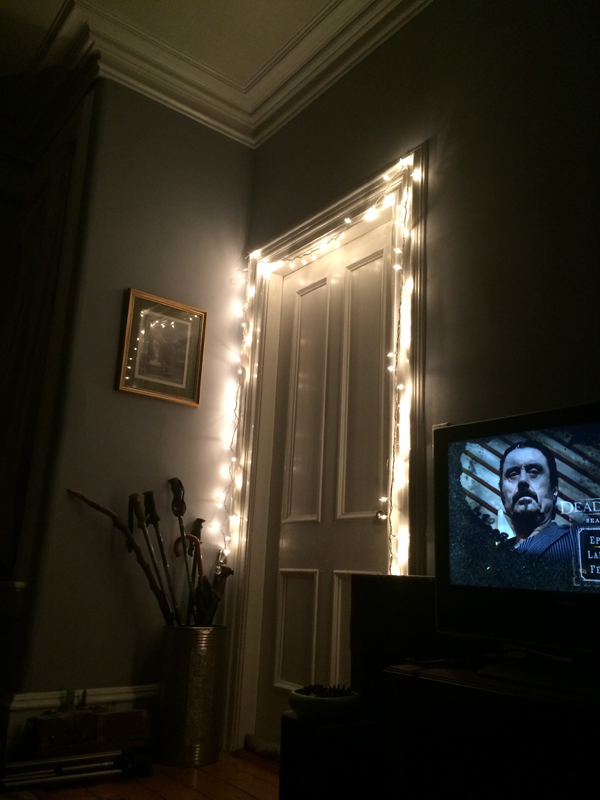