We awoke to rain and the sound of motorcycles racing. At first, I mistook the latter for the wind, not yet quite coherent and thinking myself still home in Providence. There's a race course just over the ridge from my mom's house, and I think those damn fools race every damn day. Even on Sunday. Which it is. Last night, I talked about going to church with Mom this morning, but then we both decided just to stay home, instead.

Today, I'm going to try to finish "In the Flat Field," which will be featured in Sirenia Digest No. 135. Later this morning, or early this afternoon, Spooky and I are going to read over what I've written on the story thus far.

I need to sit down and make a list of things I want to accomplish while we're down here. I ought to have done it before we left home, but I never got around to the task. Like, I want to drive up to Camp Sumatanga, near Gallant, where we went to summer camp when I was a kid, and I want to drive down to Mount Cheaha in Clay County. My Grandpa Ramey (1911-1977), my mom's father, was in the Civilian Conservation Corps during the Great Depression, and he worked on Bunker Tower atop Mount Cheaha in 1933 and 1934. Yeah, I need a list.

Yesterday, I promised I'd say more about getting stuck in the restroom stall on Friday afternoon, in Cleveland, Tennessee. Though, really there's not that much more to say. I went in and the door jammed, and there was no one else, and the quickest, least embarrassing way out was to squeeze out through the twelve inch or so gap below the door. On the filthy floor. What I did not say is that it was a men's restroom, because I used those all the way down, because it was easier and less nerve wracking than worrying that I'd cause a scene (or worse) at a gas station or convenience store or interstate rest stop by using the women's room.* No, I didn't used to do this when I travel, but yes, things are different now. And I can still pass for cis-male when I put my mind to it. No one looked at me twice. It was the first time I'd used a men's restroom, probably, since 1989 or so, and I stand by my observation that, on average, they're cleaner than women's rooms. As for my escape, was not as bad as crawling through an actual sewer. That's the best I can say for it.

Okay. I need some breakfast. I leave you with a photo of the quilt my mom made as a tribute to my Grandma Ramey (1914-2005), who was also a quilter: 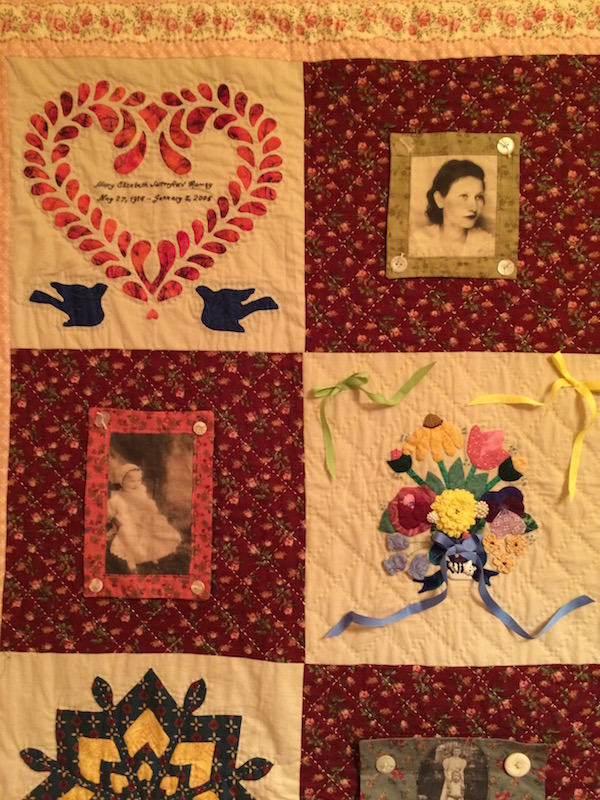 * If you take offense at this, well, that's not my problem. My problem is keeping me and Kathryn safe while we're on the road. And at almost 53, I no longer have the energy to live every moment as a "fuck you" to cisgendered normativity.
Collapse