Fighting a headache this morning, and I slept, at most, three hours. It's sunny today, but cooler. Currently, it's only 51˚F, with the windchill at 45˚F, which is much too chilly for me to be able to open the window.

A few days back, I learned that a friend from Birmingham, Rachelle Perrin, died in July of 2012. I met Rachelle about 1998. She owned and ran a salon in Mountain Brook Village called Blue Velvet, and for years she was my hair dresser and colorist. But I'd not seen her since I moved away from Birmingham in December of 2002, and we lost touch. The Salon closed on September 14th, 2010, a victim of the recession. In June of 2012, she suffered some manner of allergic reaction, was placed on life support, and died a few weeks later. And that's really all I know.

Last night, when I should have been sleeping, I posted the following to Facebook: "It just occurred to me that June 6 will mark the 25th anniversary of my starting work on The Five of Cups, which means it'll mark the 25th anniversary of my working full-time at writing fiction. A quarter of a century (though I didn't make my first pro sale until 1993). I'd just turned twenty-eight. And yet I still see people talking about me as if I'm a new author...."

Yesterday, I finally read Michael Cisco's afterword for Houses Under the Sea: Mythos Tales. There was a line that, I have to admit, does a damn good job of summing up my fiction: Sometimes Kiernan’s characters are caught in between; they’ve already lost the ordinary world, irrevocably, but that doesn’t guarantee them a place in that other world. For that matter, I think it does a damn fine job of summing up me.

We're waiting for the garage to call, so Kathryn can go pick up the van, which went in yesterday for a checkup before the trip. Later today, I have to go out an buy some clothing, which I've not done in ages. It's been at least a year since I even bought a new pair of jeans.

Yesterday, cleaning out the fridge, Spooky and I finally decided it was time to ditch the nine-year-old bottle of Dusty's sweet barbeque sauce. Dusty's was one of our favorite Atlanta restaurants, great North Carolina-style barbeque. When we left for Providence in May of 2008, we brought a bottle of sauce with us, but then we never opened it. Dusty's closed on April 26th, 2009, after being in business for 27 years, since 1982, because they had their lease yanked. For all I know, that was the last bottle of Dusty's sauce in the world. 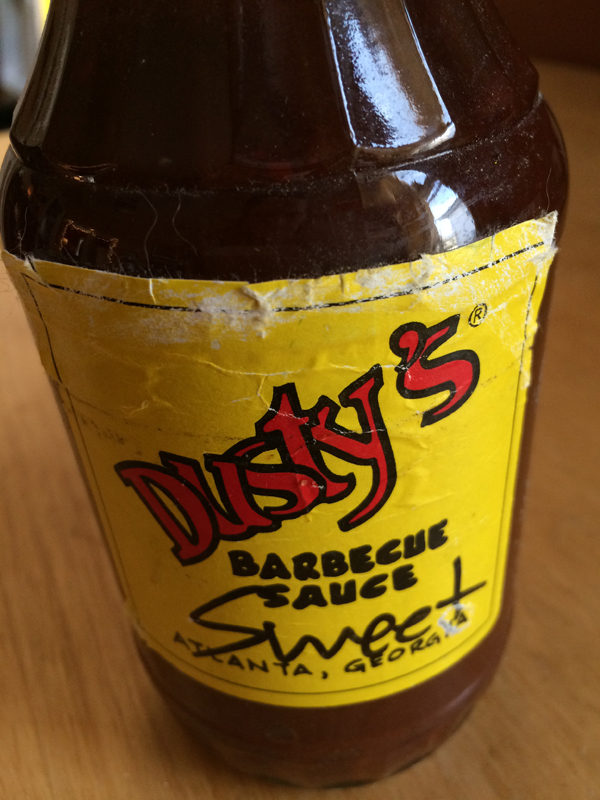