Being who I am, and with all the attendant trouble and chaos of my mind, it isn't good to be awake before Kathryn, awake before most of the city, awake before most of this street. But something woke me about 5:30 this morning, and I finally gave up trying to get back to sleep. I wasn't well, and my busy mind wouldn't have let me rest, I think, even had I been well. I sat down in this chair at precisely 6:20 a.m., the moment that the National Weather Service gave for today's sunrise. I've been reading Cormac McCarthy's Cities of the Plain and trying not to think about the things I ought not think about, but thinking about them, regardless. The light outside is grey. The sky is a deeper grey, inverted dunes of varying shades of greyness. The trees and the rooftops and the streets are all shades of grey. Only automobiles and those few houses that are not themselves grey – white goes towards grey – provide any hint of color for the morning. I heard a crow a little while ago. I heard cars and trucks out on Westminster. I hear some manner of machine somewhere, but I have no idea what it might be. Kathryn's still asleep.

Currently, in Providence it is overcast and cold, 39˚F, with the windchill at 33˚F. We have a flash flood watch for today and tonight and tomorrow, so there's rain coming. In Birmingham, it's currently 51˚F.

Yesterday was so evil a day that the less I say the better, certainly. But I have a one-way train ticket to Birmingham, if I choose to use it. The train would depart from Providence at 8:55 tomorrow morning. I just have to see how today goes. The ticket is refundable. It cost me $436, I think. Kathryn and I were planning to head down to my mom's sometime around Easter, but I may go on ahead, and she would drive down later. It's not the best scenario, but I need to get away from here.

I thought I was done with the South forever when I left Atlanta on May 31st, 2008, almost nine years ago now. But I have known since at least 2013 that I am not done with the South and neither is it done with me. It isn't about what I would like and what I would not like. The place is a part of me. The place is somehow integral to who I am, though I wish that were not the case. I'm an alien here. I've never much fit in well anywhere, but only by coming to Providence did I discover that I have a far deeper kinship with the land where I was raised than I'd suspected.

I think that Dear Sweet Filthy World shipped yesterday. So, if you preordered it, your book is on its way to you. If you didn't, there are still copies, and I wish that you would order a copy. I think it's a good collection.

I took the photo yesterday as we crossed over the Point Street Bridge, heading west, a view of April in Providence, with grey dunes hanging upside down from the sky. 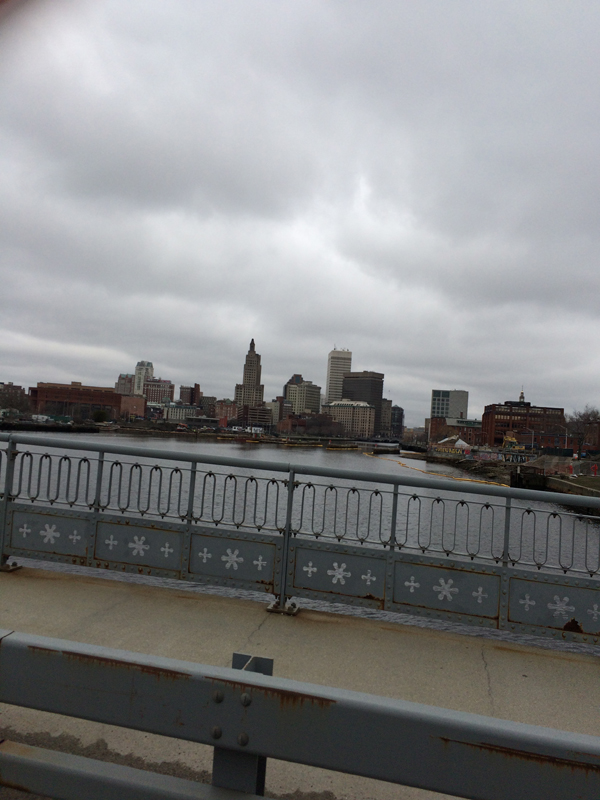