I might have slept four hours. Some mystery pain in my right side kept me awake until after 5:30 a.m.

No writing yesterday, because I had to be at my doctor's office early, and afterwards there was an unexpected drive south to Saunderstown and Spooky's parents' place. But it was nice to get out of the city. We hadn't been down that way since before Xmas. There were woods and dry-stone walls, trees and fields and greenbriers. There were buds on the apple trees that likely won't survive this cold snap, buds that appeared last week because of the freakish warmth. This happened last year, and it killed the buds, and there were no apples in 2016. We're afraid of the same thing happening this year, this weekend. Anyway, we were back home in the mid afternoon, and I signed signature sheets for S.T. Joshi's Nightmare's Realm, which reprints my SF tale, "Dead Letter Office." Lately, I feel as if all I do is sign signature sheets. The signature sheets for Houses Under the Sea: Mythos Tales are next.

There's a fish tank built into one wall of my doctor's office. I have photographic evidence below.

Please have a look at the current eBay auctions. Also, here's another good review of Agents of Dreamland, "The Static is the Signal."

Yesterday was the one-week anniversary of The Haircut. 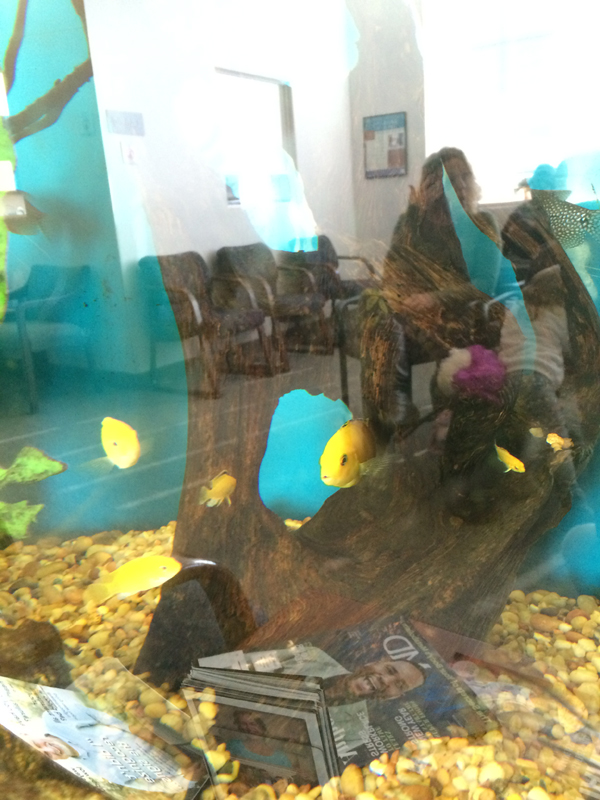