Overcast and rainy here in Providence. Currently, it's 35˚F, but the windchill is at 28˚F.

I have the Publisher's Weekly review of Dear Sweet Filthy World:

The 28 stories (most previously available only in her e-zine, Sirenia Digest) in Kiernan’s newest collection of dark fiction (after Beneath an Oil-Dark Sea) explore the human and inhuman conditions in all their filthy glory, and bravely wallow in the effluvia of mythology, murder, and depravity. The Red Riding Hood–esque, downright scary “Werewolf Smile” is about a woman whose flighty lover becomes a muse for an artist obsessed with the murder of Elizabeth Short (aka the Black Dahlia); the tale explores the intersection of violence and art. Kiernan puts her paleontology roots to good use in the atmospheric “Paleozoic Annunciation,” about a paleontologist who travels half a billion years back to a vast ocean as an ambassador to another species, and comes back dramatically changed. The grotesque underground carny attraction in “The Eighth Veil” isn’t for the “squeams,” and “Another Tale of Two Cities” is about a woman who surrenders to the “builders” inside of her. Perfectly bookending the collection is the disturbing “Interstate Love Song (Murder Ballad #8),” in which incestuous twins murder and torture their way through the American South until the tables are turned on them. Unflinching, raw sexuality and grim imagery pervade the collection. Kiernan’s dense, meandering style may not appeal to everyone, but her many fans will be overjoyed to have these works collected. Agent: Merrilee Heifetz, Writers House. (Apr.)

I think it's a very good review, despite the "dense, meandering style may not appeal to everyone" disclaimer. Who's writing appeals to everyone? Anyway, "filthy glory, and bravely wallow in the effluvia of mythology, murder, and depravity" more than makes up for that.

Yesterday, work was mostly email, because it had piled up while I was writing "Tupelo (1998)." I didn't leave the house. It's been four days now since I have. I also reviewed a catalog of the twenty boxes of papers and etc. that I've donated to the John Hay Library.

Last night, Kathryn and I watched Sarah Adina Smith's excellent The Midnight Swim (2014), a soft-spoken supernatural tale of lakes, liminal spaces, sisterhood, and regret. The cast includes Aleksa Palladino, whom I adore, she of Exitmusic and Boardwalk Empire (Angela Darmody) and Halt and Catch Fire (Sara Wheeler). I recommend The Midnight Swim for all the same reason I recommended I Am the Pretty Thing That Lives in the House, though I will say Smith misses the mark at the end of the film. Not in a way that ruins all the good stuff that has gone before, but it was unfortunate that she got so very literal at the end. Regardless, The Midnight Swim is a very fine example of knowing that a whisper can be more powerful than a scream.

We have these odd little book depot things in Providence. People leave books. People take books. The books are often, but not always, nothing I can imagine anyone actually wanting to read. But it's a cool idea. 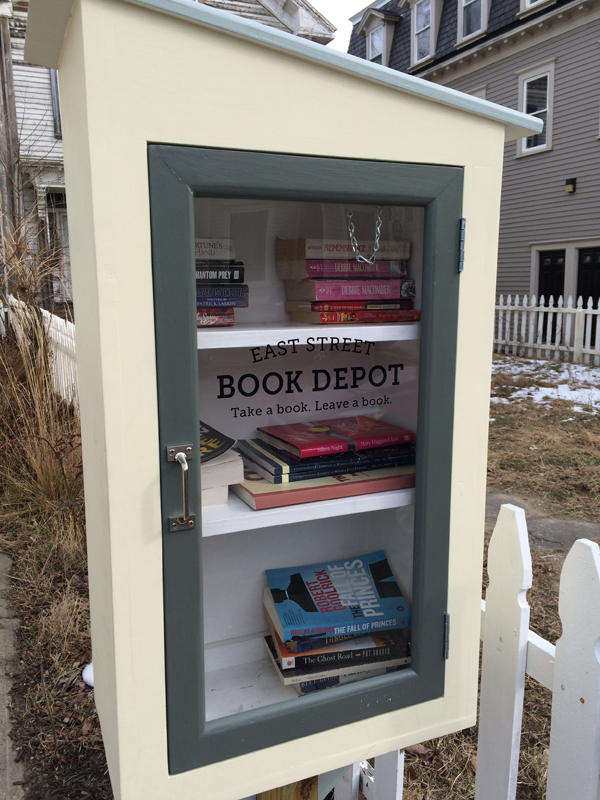