I'm still coughing. I must be expending more than half my energy every day just fucking coughing. By late afternoon, early evening, I'm exhausted, day after day.

Yesterday, I wrote 1,101 words on "Tupelo." On Facebook, I posted: "The new Dancy story, "Tupelo," has reached 5,000 words, and it's hardly started. I fear it's developed novella ambitions." Which is true. It's impossible for me to imagine this story coming in under 10,000 words. However, if I use SFFWA (Science Fiction and Fantasy Writers of America) standards, 10,000 words will actually only make it a novelette, a word I find somewhat precious and annoying. Anyway, I'm going to need several more days before the story is done, regardless of what you call it.

I haven't left the house since the 13th.

Right now, this is the world outside the Red Room: 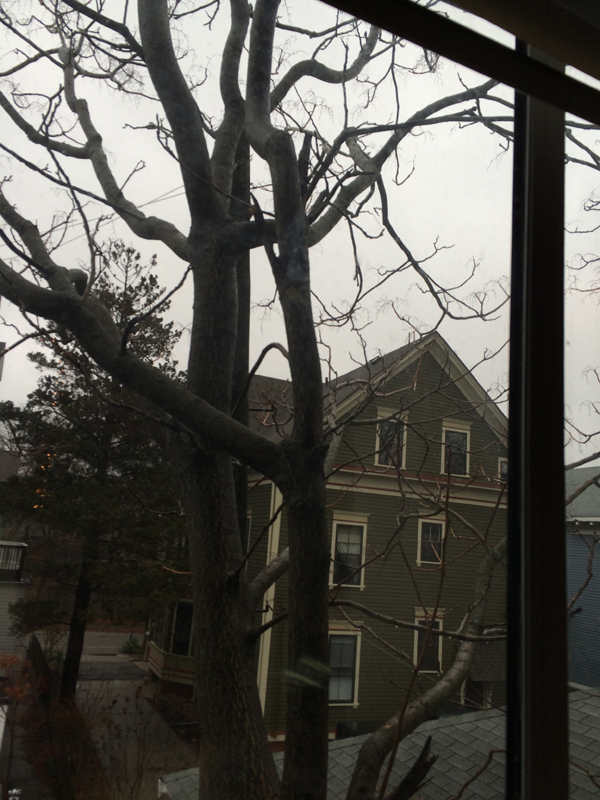 So, I have this Bowie icon that I've been using here for many, many years. It's the one on this entry. I can't recall where I got it. I found it somewhere. A week or so ago I got curious enough about the provenance of the image to do a Google image search. Turns out, it's detail from a photo from a Steven Klein/Bowie shoot that appeared in L'Uomo Vogue back in September 2003. I'm including most of those photographs, behind the cut, below. The first one in the series is the source of my LJ icon:

The idea was basically a mashup of Blade Runner (hence Priss) and Bowie's Outside (1995). Now, where this all gets really interesting for me is when these images are cross-referenced with the deeply disturbing, recurring dreams I was having in the winter of 2007 that led to me writing first "A Season of Broken Dolls" and then "In View of Nothing" (as detailed in the chapbook B is for Beginnings; Subterranean Press, 2009). At the time, I noted the connection between those stories, the dreams, and Outside, and Kathryn pointed out at the time that I'd been sleeping to Blade Runner. Now, I don't remember ever actually seeing this photo spread before last week, but I can't swear that I didn't. Regardless, the parallels are there, and it was an eerie sort of jolt, seeing the images.

Submitted, for your consideration. I just wanted to share.