Overcast today, and it's currently 54˚F, with the windchill at 50˚F. There was more rain last night, and now I can see very little evidence remaining of the snow.

Yesterday, I wrote 1,088 words on the new Dancy story. I changed the title to "Saint Joan in Babylon," but I'm pretty sure that's not the right title, either. I may change it to "Tupelo," even though the story isn't set in Tupelo. Meanwhile, Kathryn spent most of yesterday doing a last minute check through the page proofs for the collection, trying to make sure all the billion changes I marked on the galley were made. She has to finish that today, because the deadline is tomorrow.

Please note that yesterday Subterranean Press revamped their website, and the links I've given to preorder Dear Sweet Filthy World are no longer valid. Please use this one, instead, and please do preorder.

setsuled made a post about Osgood Perkins' magnificent I Am the Pretty Thing that Lives in the House, and it's a fine review, and there's a bit that I'd like to quote:

Director Osgood Perkins does such a good job at putting us in Lily's perspective that the unresolved clues feel like a realistic mystery that forces the mind to come up with its own inferences. In films, as in many other forms of storytelling, the more you can get the audience to use their own imagination for you, the more effective your work of art will be.

This is absolutely true of prose weird fiction, but it's probably the hardest thing to sell to contemporary readers. I've spent my career struggling with readers who don't want to do the work, who are offended when I ask them to think for themselves and mistake my insistence that they do so as a deficiency in my writing. Moviegoers are the same way, of course. Just look at the IMDb rating for I Am the Pretty Thing that Lives in the House. It's a 4.8/10, for what is quite probably the best "horror" film of 2016. Of course, the brilliant slow burn of the film's pacing is another thing that works against it, as it is forced to be judged by a population that has largely been left with only the most vestigial excuse for an attention span.

While I was writing this entry, the sun came out. That's a relief.

My pajama pants were made in Vietnam. The Red Bull I'm drinking was shipped here from Austria. I'll never see either place.

Here. Have a kitten. A very large kitten who sleeps in a dog bed that's too small for him. 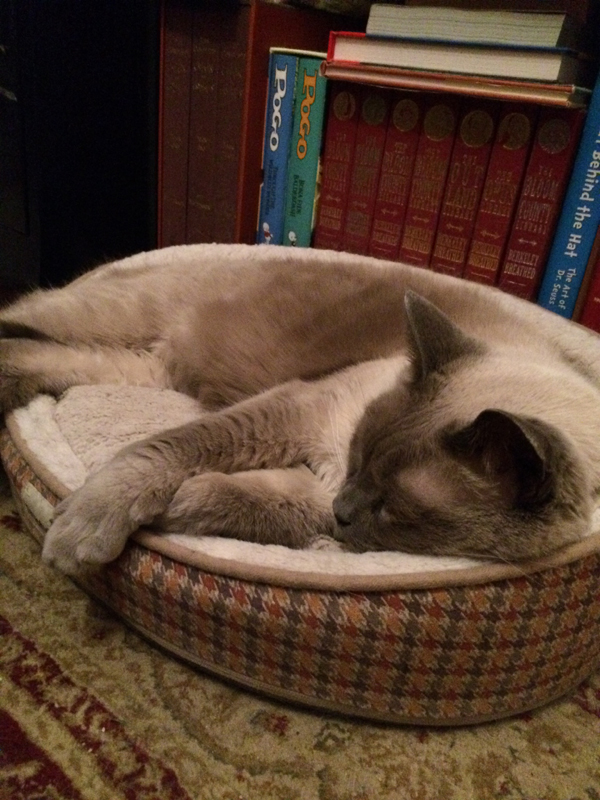