I've upped my Klonopin dose, and I'm sleeping again, which is an enormous relief. It makes mornings less a thing of terror and anxiety. Even when the sky is that shade of hungry blue and it's only 35˚F, with the windchill at 29˚F.

The last note I made before going to bed last night was that I really, really wish there were action figures for Season Five of RuPaul's Drag Race. I want my Jinkx Monsoon and Ivy Winters action figures!

Again, thanks to everyone who donated a few bucks to help with the Earthlink bill. You guys rock.

We sent out Xmas cards, and Spooky came home with a tree. It only measures about 38 inches tall, but it smells great. This is the first tree we've had since 2012. We put it on the mantle in the middle parlor and decorated it yesterday afternoon. Later, there was an after dark trip to a corner liquor store for a bottle of Bailey's, and Spooky made spaghetti for dinner. We played Guild Wars 2 and ate chocolate-covered blueberries that Spooky's brother Fred gave us. Fred's a biologist and a park ranger out on Nantucket Island. Oh, and I must have spent at least half an hour yesterday afternoon opening and reading Xmas cards, so thank you to everyone out there who sent them. There were an awful lot of you.

And today is Solstice. And tomorrow is Cephalopodmas, for which I penned the very first Cephalopodmas carol, way back in 2005.

And now, our tree: 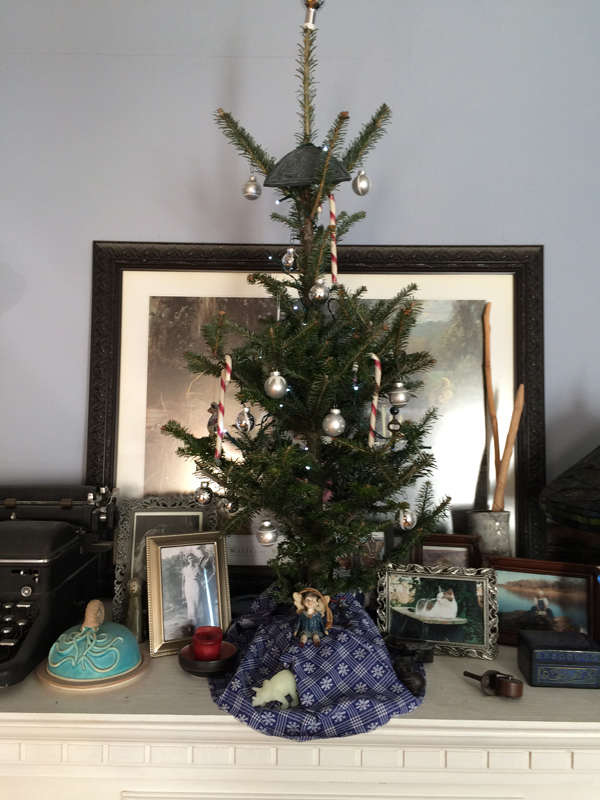