Sunny today, and it's currently 60˚F. The tree outside my window is still green. 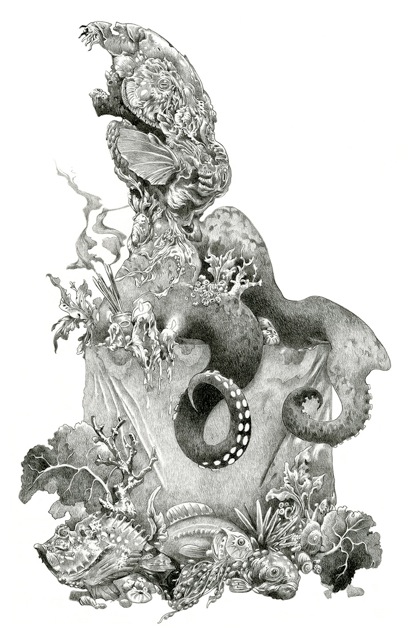 I'm told that the collection will run somewhere between $150 and $195, in large part because of the illustrations. I know this is well outside the price range that most readers can afford, myself included. This is a deluxe edition on the order of the Centipede Press edition of The Drowning Girl. I hope that there will eventually be an affordable edition, from either CP or Subterranean, but that would likely be at least three years from now if it were to happen. And no, there won't be an ebook. My apologies on the price.

These days, I feel as if I have a lot to apologize for. I've been wanting to write something here about the the Quinn books and my work for Dark Horse, and how, after finishing The Drowning Girl early in 2011, I allowed myself to be distracted – again – by the possibility that I might make some decent money, if I turned to less serious projects. It was all a horrible mistake, and one that I am still struggling to recover from and will always regret. My next novel, the one that naturally follows from The Red Tree and The Drowning Girl ought to have been published years ago, but I spent four years laboring on Quinn books and Dancy comics, and then there was the distraction of the movie deal – and all of it was, ultimately, about money. Because writers, like the rest of you, have bills, and the bills pile up.

You know, enough about that for now. I'll come back to this another time.

Except, I will say – ironically, the Quinn books were a flop, and the Dancy comics were a flop, and the money from the film option went to bills, and, ultimately, all those things I did for the money made almost no money at all. And I am back where I was in 2010, before all that bullshit began. Were it not for Sirenia Digest and the Patreon, things would be very, very dire. As is, things are merely dire.

Yesterday was lost to the worst headache I've had in many months. I finally wound up in bed, dozing. All that was accomplished yesterday was some email, and so I am now a day behind. And there's this interview I'm supposed to do, and the last thing I want to do right now is spend more time talking about myself. Oh, and yesterday I saw Tran's final version of the cover for Dear Sweet Filthy World, and it's going to be beautiful, this book. And affordable.