Apparently, I currently have the 16th most popular LJ, based on user ratings (out of 434,239 active LJs).

I've grown so weary of the politics of tribalism, of factions, of splintering. I'm tired of watching people trade inclusiveness for exclusive "tribes." Self segregation. This cockeyed search for identity and justice, ironically, discards both individualism and an egalitarian outlook for increasingly smaller groups, marked off with acronyms and abbreviations and neologisms. And, as Thom Yorke said, it wears me out. I belong to no race except the human race. And I apologize to the world for my long-ago "Species of One" phase. It was wrongheaded and born of anger and despair.

Someone said to me yesterday, "Tribalism is the new racism." I'd amend that to a new racism, since the old evils are still right here with us. It's also a new sexism. A new homophobia. As I have said, a new exclusion. But...yeah. It's a sick fucking irony.

Yeah, I'm gay. Queer. And I'm transgendered. And I'm an atheist. And I embrace androgyny. I have pinkish, somewhat translucent skin and hazel-green eyes. My natural instinct is towards promiscuity. I was born in Ireland. I'm allergic to poison ivy. And I'm blind in my left eye. And...okay, I don't know my blood type. But, in the end, all of these things fall by the wayside. I am human, and all humans are to be accorded equal rights, and we win that fight by inclusion, not exclusion, by recognizing what we have in common, not emphasizing what sets us apart from one another. Just look at the "RadFems" excluding transgender people. The examples are endless. So, no, I'm not an ally in the parlance of exclusionary social taxonomies. But that in no way means I'm your enemy.

I know that I can catch a shitstorm of flak for saying this stuff. But what is the alternative? Keeping my mouth shut for fear of losing readers and...whatever? I didn't get here by being afraid, and I'm too old to start. Kill your fear, remember?

Yesterday, the postperson brought me this (wish the photo were clearer): 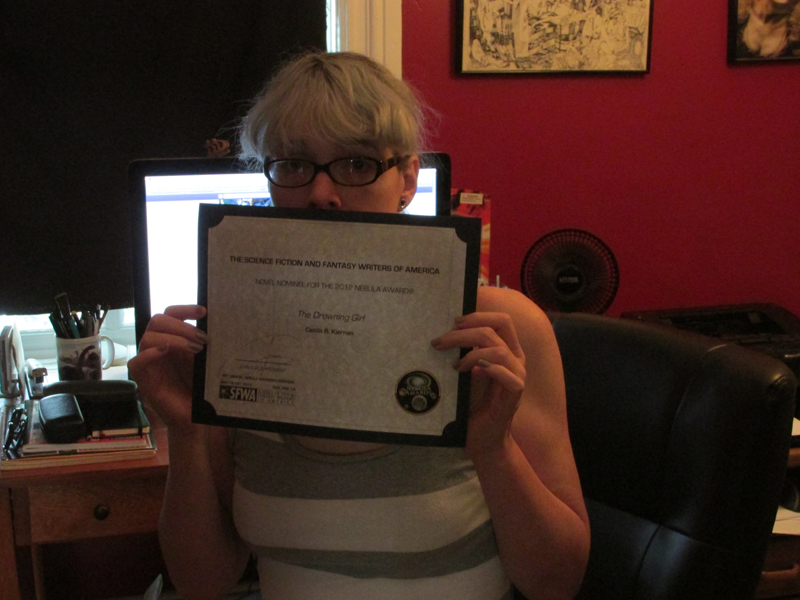 Which, appropriately, comes in this: 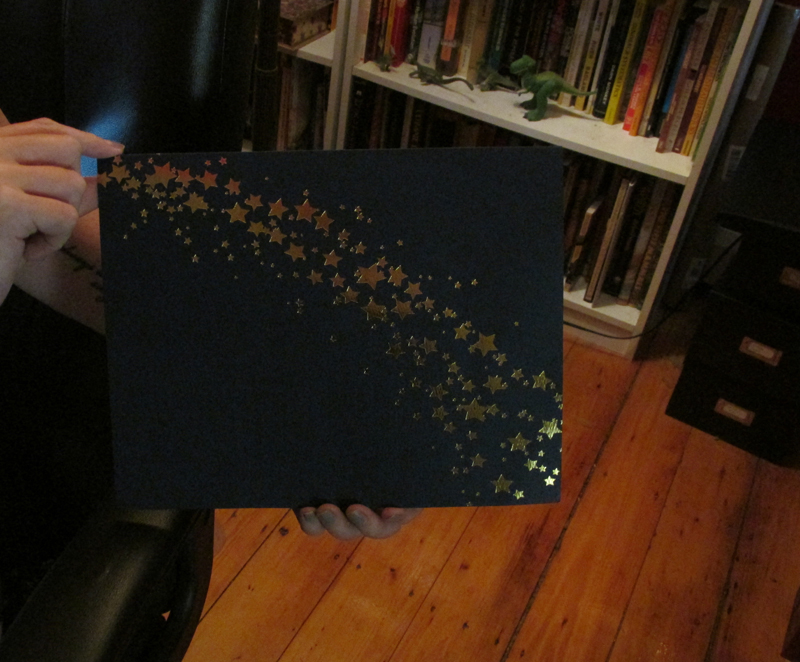 "Stars on thars," you know. Frankly, as far as I'm concerned, this is as good as a Nebula. Thank you, Danielle, for getting this to me in one piece, seeing as how I couldn't make the trip to San José.

A long, long day yesterday. Lots of email, and I did so much revision and editing to "Ballad of an Echo Whisperer" that I'm not sure I got anything new written. But today. I have to find the end of this story. I'm dithering. I sent an editors stories for a series of reprint anthologies (TBA). Someone on eBay bemoaned that The Drowning Girl: A Memoir was more like reading William Burroughs than Stephen King, so how could it have won an Edgar? I pointed out that it actually won a Stoker, not an Edgar (though that would have been bow tie, too), and that I take comparison with Burroughs as the highest form of flattery. I have no especial interest in seeing my prose compared to King. Anyway, I've never tried to fool anyone. I've said I don't write genre "horror." A million, billion times have I said that.

Fuck, I should be at the beach today.

Here's the current eBay. Please have a look, and if you're at the shore, think of me. Óe ngáru seiyí iráyo.