Rainy and overcast in Providence today. Only 79˚F.

I can write a long-ass entry trying to sum up yesterday, or I can post this photo: 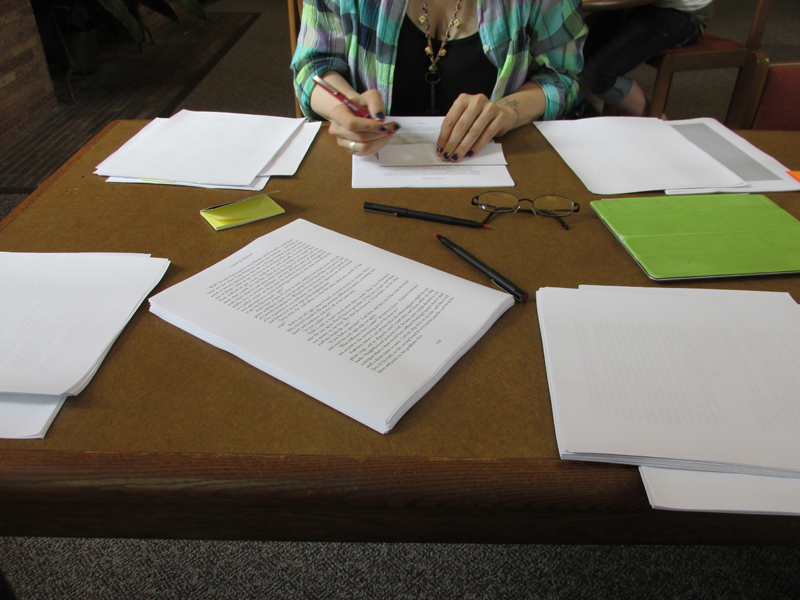 This was yesterday. Peacedale Public Library. Beautiful fog outside the windows. Five hours of proofreading the galley pages of The Ape's Wife and Others as rapidly as we could and still do a good job. I took "Galápagos," "Tall Bodies," "Hydraguros," "Slouching Towards the House of Glass Coffins," and "Random Notes Before a Fatal Crash." Spooky took "The Sea Troll's Daughter," "As Red As Red," and "The Ape’s Wife." She also went over "The Maltese Unicorn" again. (Stories not listed here were already proofed). It is very strange, reading so much of my work at once that way. It's something I almost never do. But, yes. The book (and Black Helicopters) is proofread. It goes back to subpress today. Hopefully, we're still on schedule for the November release.

Please have a look at the current eBay auctions! Our current Compapolooza has begun! That is, I'm selling off lots of comp copies, because I do not need two or three copies of every anthology in which I have a short story. Note, in particular, the copy of Paula Guarn's Ghosts: Recent Hauntings, which contains "Apokatastasis," a story that has appeared nowhere else but a defunct ezine (that never paid me) and To Charles Fort, With Love. Plus, cheap, hardly more than cover price. I will sign and personalize them, of course.

Also, as I said yesterday, I want to point you to Spooky's Etsy shop, Dreaming Squid Dollworks and Sundries. On Facebook, she wrote: "Prices have been reduced on everything in my Etsy shop. After July 31st I will be removing everything, so if you want something, now's the time." Old stuff is leaving the shop; new stuff will, eventually, be going up. So, if you want one of the remaining – very, very bow tie – items, act now, kittens.

But now...finally...I can get back to work on "Ballad of an Echo Whisperer."