Here in Providence it's a sunny summer day, mid eighties Fahrenheit, the heat index in the mid nineties. There are just enough clouds the sky is kindly, and we'd be heading south to the shore were it not for my being so far behind on work and were it not for the tourists.

We never much celebrated Independence Day when I was a kid. Mostly it was something talked about at school. Leastwise, that's how it seems now. What I remember is that July 4th was my Grandfather Ramey's birthday. He'd barbecue (always pork). That's how I think of July 4th. My grandfather was born in Shelby County, Alabama in 1911, and today is the 102nd anniversary of his birth. He died in January 1977. This photo was taken about 1958. 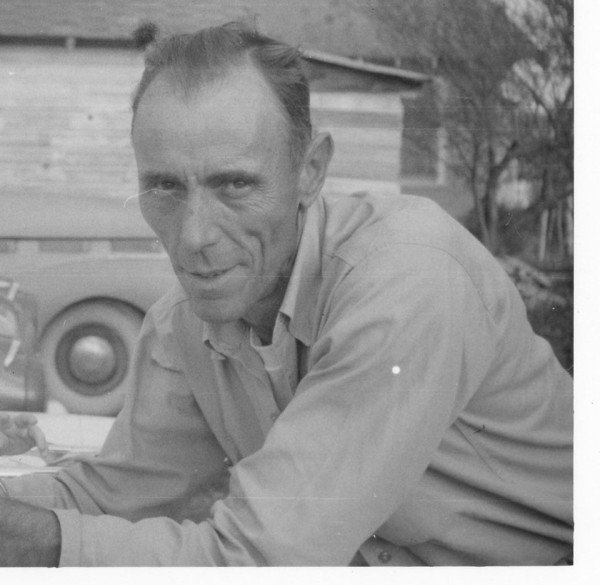 June is gone, and here we are four days into July, and, frankly, I've accomplished nothing much this summer but busy work, mostly editing, contracts, crap like that. The trip to New Orleans was a significant source of the distribution, but, also, there just been a mounting exhaustion. I've just finished two, sadly, exasperating years with Dark Horse. I chose to write Red Delicious this spring, to replace Fay Grimmer. I have lots of good reasons for getting behind, but none of them are anything my deadlines give a shit about.

All that matters is that I get back to work.

Kathryn and I had a good eleventh anniversary yesterday. We had brunch out, took in a late afternoon screening of Joss Whedon's take on Much Ado About Nothing, and had dinner out. I know that a lot of Shakespeare purists are horrified at the Whedon-verse Much Ado About Nothing, but...whatever. It's a bizarre little film, and it isn't good Shakespeare – not by a long shot – but it is fun. And as with every production of this play – probably for forever – Dogberry steals the show. In fact, Nathan Fillion is the best Dogberry I've seen since Michael Keaton in Kenneth Branagh's 1993 production. The most interesting thing about watching Amy Acker as Beatrice was realizing how she could possibly pull off an old-school screwball comedy, something along the lines of Bringing Up Baby. As for Alexis Denisof's Benedick, well...that was just sort of painful to watch. Yeah, sure, I suppose there was that whole "Fred and Wesley forever!" fan thing, but...no. Painful to watch. But still not half so much as watching Keanu Reeves play Don John (back to 1993).

We watched the most recent episode of Definace last night. The series gets better with every episode, and I can't believe there's only one episode left in this season. It was a relief to hear that the series has been renewed for a second season (thirteen episodes).

I've been reading more Ambrose Bierce, such as "Charles Ashmore's Trail," "Perry Chumly's Eclipse," and "The Other Lodgers." Also, the usual lot of paleontological papers, including "The earliest known fisher (Mustelidae), a new species from the Rattlesnake Formation of Oregon" (JVP 33:2), "New data on the diversity and abundance of small-bodied ornithopods (Dinosauria, Ornithischia) from the Belly River Group (Campanian) of Alberta" (JVP 33:3), and "A new Cretaceous pliosaurid (Reptilia, Plesiosauria) from the Carlile Shale (Middle Turonian) of Russell County, Kansas" (also JVP 33:3).

And Spooky's back from the market.