Okay, well, I'm beginning this entry now, but at any second I'm going to eat a fucking English muffin with strawberry preserves (NO HFCS!). Not precisely warm here in Providence, cloudy, but we might have a high of 65˚F. And at least the clouds are hiding that wide carnivorous sky from view. The plan is to get a little work done, finishing up the very last line edits on the Centipede Press ms. for their edition of The Drowning Girl: A Memoir and email it to CP, and then emailing the [muffin break] script for Alabaster: Boxcar Tales (Chapter 9) to my disturbingly eager and on top of shit editor at Dark Horse. And...I think that's all. But we won't be going south to the shore, because it's always substantially cooler down there. Fuck this Cold Spring. I am so close to moving back to Alabama. Hell, back to fucking Leeds. We could rent a house in Leeds for $750 a month, a fraction of what we're paying here. Yeah, it's in Leeds, but at least that haven of xenophobia is WARM.

I suppose there ought be a day-by-day recap. No one but me will care, but, ten years from now, I might want to know:

I wrote two more pages on the script for Alabaster: Boxcar Tales (Chapter 9), which came to 986 words. I'd hoped to finish it, but I didn't. Beginning with Chapter 6 of Alabaster: Boxcar Tales, I became determined to slow down and do this thing as right as I can, given I'm having to write it in eight-page increments. The first five issues, the mermaid story, was horrifically rushed and mushed up. It needed to be a five-issue mini-series (~110 pp.), but, instead, I only got 40 pp. And it shows. So, I've thrown out the whole each-installment-has-to-be-self-contained foolishness, and I'm allowing this story, here at the end, to take the time it needs. I am not proud of those first five installments. To my memory, I did nothing else of note on Thursday. I'm thinking. Oh, I'm still working on the November 2012 issue of JVP, and I read "A new species of Waengsjoeaspis (Cephalaspidomorpha, Osteostraci) from the Early Devonian of Northwestern Canada, with a redescription of W. nahanniensis and implications for growth, variation, morphology, and phylogeny." I cursed the weather, but actually left the house. We had pizza from Fellini's, tiny chocolate cupcakes with star-shaped sprinkles, and we watched Andrew Weiner's The Frankenstein Theory (2013), which was much, much better than I expected.

I wrote the last two pages of Alabaster: Boxcar Tales (Chapter 9), which came to 1,065 words. I cursed the weather.

Spooky did most of the remaining line edits on the ms. for the Centipede Press ms. for their edition of The Drowning Girl: A Memoir (8-Back Pages). Then I took over and did a bunch of stuff that only I could fix. Then I did line editing on Alabaster: Boxcar Tales (Chapter 9). Dinner was burgers from Five Guys. No, we're not exactly eating healthy, but fuck it. Oh, and I pissed off several people on Facebook by posting:

My life is dominated by three emotions, essentially to the exclusion of all others: anger, regret, and depression. Of these, I consider anger the most positive, and so allow it to lead me whenever possible.

I actually had to ban some happy-talk Christian bitch, because she wouldn't shut the fuck up about how this was all my fault. I should have banned several others, but I displayed remarkable self-restraint. You know, you don't have to agree with what I say, but you do have to respect my right to say it. Anyway, there's Sunday.

Here's a tiny preview of the images that will accompany the special edition of The Drowning Girl: A Memoir, a letter from George Phillip Saltonstall to Mary Farnum (created "Indrid Em"): 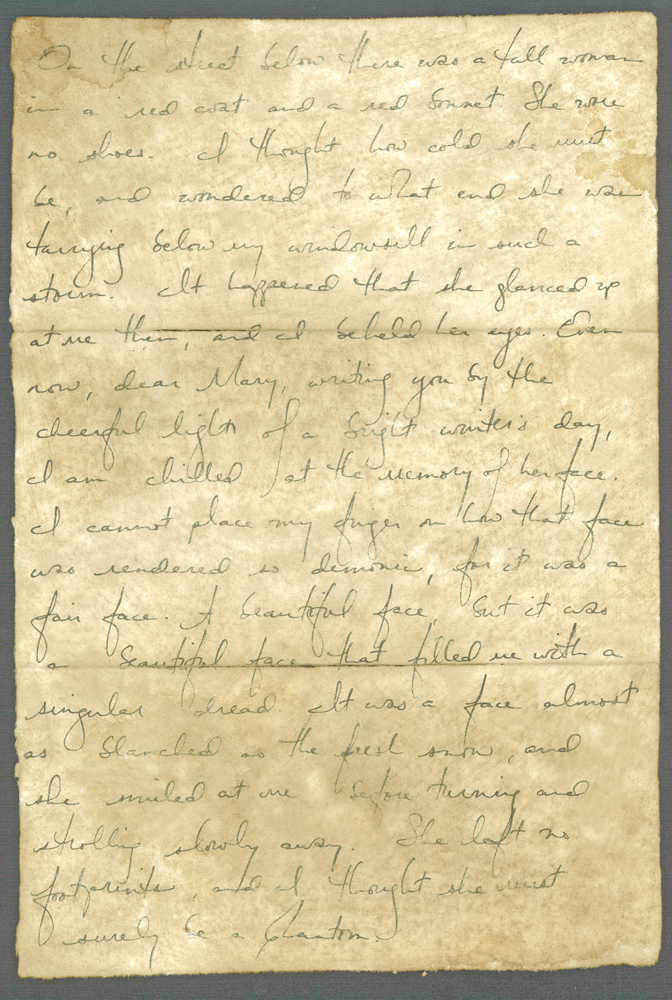