Okay, I was not just having a heart attack, so that's one thing that didn't go wrong today. As for the Turkish disappointment, I'm thinking I'm not going to say much else on the subject. But there is this write up (in Turkish), from KAOS GL, a Turkish GLBT rights group. There are people I want to thank for kind words yesterday, people here and in Istanbul, but I'm just not up to it today. Maybe tomorrow. I cried yesterday, and I'm not going to today.

Yesterday's only actual silver lining was news that I've sold French foreign rights for The Drowning Girl: A Memoir (details TBA). I think it's a novel that will work very well in French. Now, if I could just get German.

So the constant reader knows how I am no fan of Amazon "reviews," but I saw one this morning for Blood Oranges that lifted my spirits just a little. For one, it's a five-star review, and, well...authors and five-star reviews. even when they're "reviews." 'Nuff said. But it's titled, "YA novel for the bad girls in detention." I saw that, and I almost shouted, "YES!" Instead, I just said "yes" with a lot of enthusiasm. Then, the first sentence: "This is the worst book Caitlin Kiernan has ever written." Again, "YES!" Love at first sight. Thank you, "Tyr Shadowblade." You understand. The rest of you, please read the review. Also, no, I'm not being sarcastic.

The final Defiance beta was this past weekend, and the NDA was finally lifted on Friday. I don't have a lot of comments at this point. Let's see. Defiance is a very enjoyable over-the-shoulder shooter console game in which a lot of other players are present. Which is to say that this is, in no way, what I think of as an MMORPG – RP would be impossible – or even and MMO. Yeah, you can team up, blah, blah, blah. There's PvP, blah, blah, blah. But it never felt like an MMO. In fact, the presence of other players, most with stupid "names," hoping about like goddamn spider monkeys on crack, actually pulls you out of what might be an otherwise immersive experience. However, Trion has designed another extraordinarily beautiful game. The world and aliens and tech are beautifully realized. It's dirty, gritty, raw, and bloody. And shooting down mutants with the wide array of weapons provided provides hours of fun for the entire family (or at least for me and Spooky). But will I be buying it on release? No. Probably not. I'll likely wait until I can get it cheap, and probably also after I've seen the TV series, which could lead to me feeling more love for this game. Unless the show sucks, which would have the opposite result. Which, of course, is what makes this game such a spectacularly risky venture for Trion, as that reaction is going to ho,d true for a lot of people.

Whoa. Hey. I think I just created, by typo, a BRAND NEW emoticon. Even though I fucking hate emoticons. Did you see it? No. I think I made an owl:

Though, that would be an owl winking, which they do. A plain owl would be:

I didn't see it either. Spooky had to point it out.

Anyway...there's you some words and two photos. I must do stuff now. I mean other stuff than this stuff.

Off to Other Stuff,
Aunt Beast 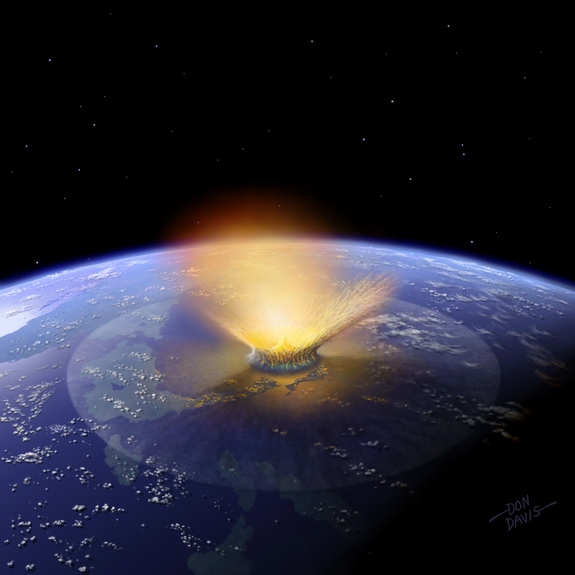 The ancestral Gulf of Mexico, one day or night ~65 million years ago.
Collapse